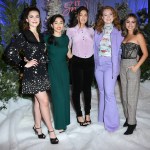 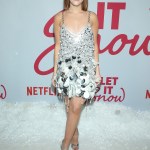 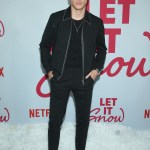 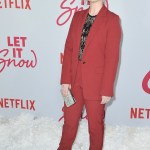 ‘Let It Snow’ is the latest holiday movie coming to Netflix. Kiernan Shipka, Matthew Noszka, and more tease their characters, whether the movie stays true to the book, and more in our EXCLUSIVE interviews.

Let It Snow will begin streaming Nov. 8 on Netflix. The movie, based on the bestselling book of the same name by John Green, Maureen Johnson, and Lauren Myracle, features so many of Hollywood’s most talented rising stars like Kiernan Shipka, Isabela Merced, Odeya Rush, Matthew Noszka, Shameik Moore, and more. HollywoodLife spoke EXCLUSIVELY with the cast the movie’s Los Angeles premiere on Nov. 4. They were able to give us some insight into their characters before the movie’s debut. “The Duke is a really fun character,” Kiernan told HollywoodLife. “She gets caught up in a bit of a love triangle, as is custom for characters that I play, but she’s a really cool girl. She’s self-assured and it’s basically about a girl kind of finding her way as a young teenager, coming of age, sort of finding out what love is and how to express it and how to tell people how she really feels.” The Chilling Adventures of Sabrina star also revealed why she wanted to take on the role of the Duke. “I love John Green and I love this book,” she said. ” I love this script for a really long time. When it all sort of started coming together I thought it was kind of the perfect contemporary movie in a lot of ways.”

The Duke is friends with Tobin and JP, who is played by Matthew. “JP is a guy that you wouldn’t expect to be who he is,” Matthew said. “He’s someone that a lot of people I think just in today’s society and in a movie you would look at and you’d be like, ‘Oh, he’s like a good looking guy that probably doesn’t know anything.’ It was a great role for me because I really loved diving into his character, someone who is truly passionate about helping others and that’s what he does in this movie. He can step up and speak for himself and tell people who he is and what he stands for. I think that’s what he gives Tobin in the film. Tobin, the Duke, and my character are like the three Musketeers. I think I give him the courage to finally stand up to bullies. But not only that, tell his crush that he is in love with her.”

Let It Snow consists of three separate holiday romances. Isabela and Mason star in their own story as Addie and Jeb. She’s conflicted,” Isabela told HollywoodLife about her character. “My character got accepted to Columbia and she’s from a small town. She kind of hates Christmas and is very pessimistic about it. She’s dealing with this one conflict that she hasn’t told anyone about yet. So it’s a very hard time for her. This marks either the start of something new or the continuation of the old, so she has to make a big decision.” Mason plays Jeb, who is Addie’s boyfriend. Mason teased that his character is “misunderstood.” Jeb is part of the debate team and “spends a lot of his time socializing. He maybe should be paying attention to his respective other, and it kind of creates a tension between the two that gets fleshed out throughout the film. It’s just like in real life.”

With this being a film adaptation of a book, we had to ask whether or not the movie would stay true to the book. “It’s not the same,” Matthew said. “I spoke to John Green and Maureen and they gave me the insight on who my character truly was. I found out that John actually characterized himself after Tobin and it was cool because Tobin and I have this love-hate relationship. But towards the end, it kind of really pulls together. I think it is different from the book, but it was good that it was different because it made it more contemporary and it spoke to the age that we’re in now.” Mason added that there are “definitely surprises” in the movie that deviate from the book. “Like Harry Potter or something, when it stays too close to the book, it’s almost like I can expect everything to be that way and it kind of irks me sometimes,” Mason continued. “I like that there are some surprises, or creative liberties, taken from the source material. This definitely does that. So hopefully you like them.”

There are so many holiday movies out there these days. Shameik and Mason discussed what sets Let It Snow apart from other holiday films. “Just the cast. None of us had been in a holiday movie, so I think the cast and the directors always make the movie,” Shameik said. “It’s three different movies: there’s the movie that you write, there’s the movie that you shoot, and there’s the movie that you edit. I think what makes this movie different might not be the writing, but it’s probably the execution and how it was put together.” Mason added, “It’s definitely the connection it makes with teenage relationships between the different demographics, different sexualities, race, and though it’s not an overtly political film, it does shine a light on who we are as people and how we can relate to one another through the holidays and in general.”