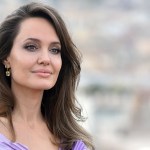 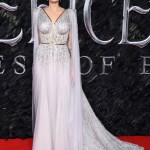 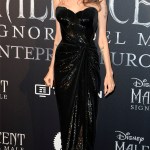 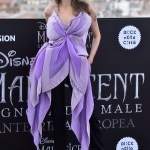 Angelina Jolie graced the cover of the December 2019/January 2020 issue of ‘Harper’s Bazaar’ in a transparent veil, baring all of herself, including what she hopes for the next chapter of her life.

Angelina Jolie, 44, is bravely embracing herself and everything to come in this new phase of her journey. The Maleficent: Mistress of Evil actress appeared on the cover of Harper’s Bazaar December 2019/January 2020 issue wearing absolutely nothing beneath a thin, white sheer veil that softly fell over her body. In the artistic photo, Angie is seen with her body angled and turning her head to the camera with her eyes staring down the lens. Her expression appears incredibly stoic, with no clear exaggerated emotion shown. The gray background totally casts the mood for the image, as her veil billows and moves around her body. Along with the stunning photos, Angelina opened up about her past and what she hopes for the future.

It’s been a transformative year for Angelina, who has openly discussed being a mother and watching her children grow up. But the notoriously private actress candidly talked about her own misgivings and struggles in the Harper’s Bazaar profile. The Oscar winner revealed a personal story about her mother and a particular tattoo that always inspires her to embrace her ‘wild heart.’ “I have a tattoo, ‘A prayer for the wild at heart kept in cages.’ I got it when I was 20,” the actress shared. “I was with my mom one evening, and I was feeling lost. I was restless—always. I still am,” she confessed. “We were driving to dinner, and she talked about spending time with Tennessee Williams and how much she loved his words. She told me he wrote that, about the wild at heart.” Feeling inspired, Angie revealed that she and her mother “drove to a tattoo parlor, and I got it inked on my left arm. What she did for me that night was to remind me that the wild within me is alright and a part of me.”

While the past has molded the actress into the empowered star she is, Angelina is ready to take on the future. She shared her dream for everyone in the coming year, revealing she wants “everyone in 2020 to remember who they are and to be who they are regardless of what might be disrupting their ability to be free. If you feel you are not living your life fully, try to identify what it is or who it is that is blocking you from breathing,” she said. She also encouraged readers to, “Identify and fight past whatever is oppressing you. That takes many forms, and it is going to be a different fight for everyone.”

Fighting against prejudice and injustice are causes incredibly close to Angie’s heart, as well. Over the years, Angelina has utilized her platform to highlight human rights issues and molded a platform on encouraging thoughtful conversation around such topics as women’s equality. “I say this with a deep understanding that for so many women, freedom is simply not an option,” she shared. “Their own system, community, family, government works against them and is part of what is shutting them down.” Those words and ideas have been instilled in her daughters as they continue to grow up. But for Angelina, the future is about embracing her true ‘wild heart,’ and her photos in Harper’s Bazaar show just that.

During this time of transition, as she continues to navigate custody of her children with ex, Brad Pitt, Angelina appears ready to boldly take on the future. The actress looked radiant for Harper’s Bazaar and revealed some of the most intimate parts of herself, while confidently appearing in only the veil throughout the magazine. Fans cannot wait to see how Angelina takes on this new, exciting chapter of her life.