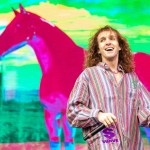 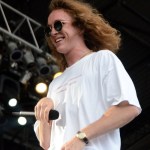 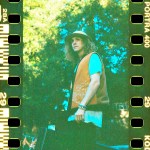 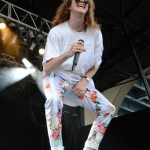 Don’t be mad if you fall in love with Felly. The rapper/singer teamed up with the legendary Carlos Santana for his seductive new jam, ‘Heartstrings,’ and he tells us EXCLUSIVELY how this came about.

Felly, the 24-year-old rapper/singer-songwriter from Connecticut, has been making waves for years but he really caused a splash in 2018 with his Surf Trap release. The album blended a wide range of influences into a captivating audio experience, one that transcended genre. Now, the prolific musician is back with “Heartstrings,” the first single off his upcoming album. Released on Oct. 29, the seductive jam is perfect for those hazy, sun-kissed afternoons – or for those late hours in the club. It’s a song that latches on and never lets go, thanks to Felly’s smooth delivery and the electrifying appearance by rock god, Carlos Santana.

“I wanted to create something organic and natural with the visual,” says Felly, who directed the “Heartstrings” video. “We filmed with Super 8 film before Carlos was even into the record. There was a sense of synergy where we added shots of him that look like they were filmed in the 60’s/70’s. This is by far my favorite visual I’ve put out. Being able to work with Santana was a powerful experience.”

Felly chatted with HollywoodLife about how the collaboration came about, some of the “spiritual” nature of his music, who he’d love to work with next, and how he’s thrilled “in keeping, exploring, and tapping into new energies.”

You’ve teamed up with Carlos Santana for your new song. Does this mean that you and Matchbox 20’s Rob Thomas have to battle for Santana supremacy?

I think Santana’s for the people, man. I don’t know if he would want that.

How did this collaboration come about?

Someone at [Same Plate Entertainment] just sent it on a whim, sort of like, I think they gave the analogy like, “If this is a college, this would be the reach school.” We were trying to get a feature on it because we knew it was a really strong record. We were just trying to get someone else to be a part of it help to up the dose and stuff of it, not that it really needed it but just because it could. In this day and age, in this climate with music and stuff, it is kind of nice to have collaborators and, of course, for the fans to have something to latch onto.

Someone just sent it on a whim. He organically ended up loving the track and wanted to be a part of it. Within a few days, it was just like, “When could we make this happen?” I found myself flying up to the Bay Area two or three days after hearing about this. It’s sort of like, I feel like, a surreal dream.

What was it like with working with Santana? Did you go into the studio and watch him lay down the tracks?

Yeah. We had a very in-person session where we met him at the studio that he goes to and the people he usually works with, with all the gear that he usually works with. We actually have a video of it coming out that we filmed it, but pretty much the track was done, and he just wanted to play guitar on it.

We pulled up a small squad and got in there, and he was there 10 minutes early, and within a few minutes, he was like, “Hey, man. Do you got any tones ready for me?” Asking the engineer if he has some guitar tones picked out and then he just starts shredding and would just do a few takes, and it was just like the best guitar playing I’ve ever seen.

Also, just after the takes, he would talk to us about different things that he’s into and just how he sees music and how it’s about putting your mind to the side, like having your mind step away and allowing to channel that greater, higher realm of energy. It was just super, super woke sh*t and super very tapped into the universe. I really think that guy is from space. I mean, he said it himself. He’s like, “I am from space.” He’s like, “So are you.”

It’s just like it was a really cool new perspective on music but also life and just sort of gave a more spiritual, supernatural aspect to creation rather than just getting in, doing a couple of takes of just running through the motions. It felt very fresh, and this is coming from someone who’s 72 and has done this so many times, so it was cool to have no hint of mundanity or lack. It was just fully fresh. He was more alive than some of my friends I was with. It was really cool to see.

It’s really cool that this happenstance collaboration created such an amazing track.

I agree. I mean, just in the hip hop/rap world, there’s a lot of pressure to get people on the track who are hot right now and who could get you a new fan base and all this bullsh*t that just comes with trying to play the game. That’s always sat pretty ill with me, and I never thought that was cool. I always thought that my fans would see through that.

When this happened, it was like, “Oh, yes.” As natural as it could be, as non-ploy. It wasn’t a stunt by any means, but it ended up being because it’s really cool, but that’s not the intention of it. When something has a pure intention, it’s received like that.

Are you going to build on the Surf Trap sound, or is this song indicative of a new direction? Because it seems like you’re going through different layers and different variables of your sonic career.

Definitely. I’m happy that you see it like that because it’s a train that is going to keep going. If certain areas of the land look familiar, that’s cool, but it’s always going to be new territory just because by nature, I feel like I can’t do the same thing over and over again. That sh*t’s just boring to me.

I just find a thrill in keeping, exploring, and tapping into new energies. What you’re going to hear on the new album is stuff that is maybe a little reminiscent, like I mentioned, of some older stuff, but it totally sounds brand new, and it’s not like anything else. That’s the goal.

You really have put out a lot of work over a short period. What do you think is the drive on this prolific run? Do you feel complete when you’re songwriting, and if you’re not songwriting or making music, you’re thinking about making music?

Yeah, no, exactly. To hear you say I’ve put out a lot, I don’t feel like that at all. I feel like I haven’t even put out my first record yet. It really doesn’t feel like that. All the old stuff doesn’t feel like today, so that sort of eats at me as, “How can I share how I am today, how I reinvented myself, and how I feel today?” Because it’s not anything like those feelings and that those were parts of me and they’re all eventually going to make up a whole, but yeah, no, it does eat at me every single day.

It doesn’t matter if I had 20 more albums out or if they’re all big. Even if they all went number one or whatever, I don’t think I would have this feeling in me to stop creating, and the drive to keep putting out and sharing with the world will ever really die.

Are you going to branch out to other mediums?

I’m open to everything, but music has been what helps me. It’s sort of like a spiritual thing, too. It’s like the closer you can get to making really good music, i.e., allowing that to be channeled, allowing the higher energy to be channeled, the closer I feel with a higher power and God and stuff. If you can lock in on that, it feels like church. It feels like you’re in the right pocket, and you’re serving your purpose here on Earth. It feels spiritual, almost.

I’ve tried other mediums. I mean, sometimes painting does that for me. I’ve tried to do some stuff in clothes, but then I’ve also been like, “This doesn’t resonate with me. These are just clothes.” But I don’t know, maybe one day I’ll see it as, “This is just music. Who cares?” But right now, to me, music is a very big gift from God that we should utilize.

I was reading about two years ago you said this really profound statement of, “You need some loss for art to exist.” Does that still apply to you today? Do you think that loss still motivates your art, or have you found a new kind of energy?

Yeah. I think this year has proved that more than ever. It’s like when you get destroyed, or what you think is something that holds gets destroyed, it leads to a greater search. It’s like the land that you were on that you thought was the only land or the land, if that goes, then you’re devastated by it, obviously, at first, but then you’ll eventually keep going to find new land. It’s probably better and it’s just meant to be.

We know that we have Carlos Santana on it. Can you divulge any potential other collaborators on upcoming music?

They’re all kind of in talk, but it’s been nice to meet people in LA and get in touch with people out here and actually be able to organically text somebody and be like, “Hey, can you get on this song?” or, “Are you interested in getting on this song?” rather than it being a label or about money or dissing people, that doesn’t feel personal.

Yeah, some of the people that maybe you’ve seen me hanging out with on Instagram or something. And a lot of friends, my friends have been helping me out with the album the whole time, too.

Well, we will close things out by putting it out there: since you just worked with one music icon, a living legend, is there another one, someone who would be on the “bucket list”? Should we try to see about getting you Bootsy Collins’ number?

This interview was edited for clarity. “Heartstrings” is out now.