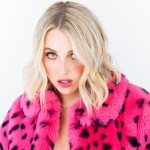 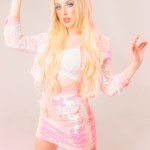 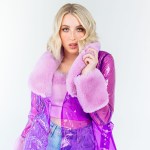 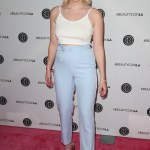 The new music video from Elli Moore is more than ‘OK’ – it’s fantastic! We’ve got the EXCLUSIVE premiere of her candy-colored visual for the bop, and she tells us why it’s one of the ‘favorite songs’ she’s ever written!

It’s Elli Moore’s world, and that is perfectly “OK.” The singer – who is half of the female writing/production duo, LYRE, and the current singing voice behind the Barbie franchise – has stepped out of the production booth and in front of the mic. She also stepped in front of the camera for the brand new video for “OK,” her infectious jam about finding true love – with herself. “But you wanted me to be what you need / Stead’of being me/ Oh, and that’s how I knew it / I guess I never loved you like I love me / I guess I never loved you and that’s OK with me,” sings Elli.

Despite being such a catchy bop with a strong message within its clever songwriting, Elli tells HollywoodLife that she hesitated before dropping it as a single. “‘OK’ was such a hard song for me to decide when to release,” says Elli. “It’s one of my favorite songs I’ve ever written so. It was like letting my baby go out into the world. The message means so much to me because I think realizing that self-love and self-reflection are important IS so important.”

Elli also spilled the tea behind the eye-catching video. “The story behind the music video is simple but very clear,” she tells HollywoodLife. “It’s me, realizing the importance of self-love over any toxic relationship. This video is a love letter to all my fans, to remind them about the importance of their own self-worth and independence, which is why you see me dancing fabulously in my robe, eating donuts in the bathtub (fully clothed) and feeling like no one can tell me anything.”

I’m beyond stoked to announce that my single “OK” will be out on 10.17.19 this is one of my favorite songs so handle her with care! I wrote this song about how important it is to be in love with yourself, its so easy to lose who you are when you are in a relationship and this song really addresses that its ok to put yourself first. I love you endlessly and can’t wait for you to hear 🍩

“More than anything, I wanted the song to be painfully stuck in everyone’s head,” Elli adds. Mission accomplished. The groove is impossible to ignore and the hook? “The hook is my favorite part,” she tells HollywoodLife. “I love it when people tell me that they have been singing it for days and can’t free themselves from it. My friend, Trevor Moran, texted me saying, ‘It’s official, “OK” is my shower song,” which is pretty epic.”

So, whether you’re blasting Elli Moore’s music in the shower, in the car, in the club, or during spin class, it’s okay with her.