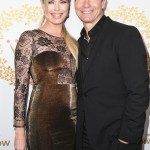 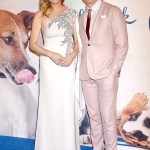 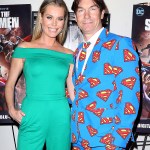 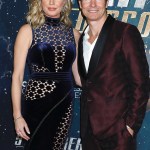 Jerry O’Connell and Rebecca Romijn have been married since 2007 — basically an eternity by Hollywood standards. So, what’s the secret to their long lasting love?

Jerry O’Connell, 44, and Rebecca Romijn, 46, who are parents to 10-year-old twins Dolly and Charlie, are marriage goals. The gorgeous couple have been together for 12 years and they clearly still have that special spark. So, when we caught up with Jerry at Much Love Animal Rescue’s Spoken Woof benefit in Los Angeles on Oct. 17 we had to ask him to share their secret to a lasting marriage.

Always funny, the actor, quipped “I’m as shocked as you, I’m more shocked than anybody. What is our secret? Have twins, and then you can’t get divorced because neither one of you wants the twins by yourself so you have to stay together.” Playing off the night’s theme of animal rescue Jerry added, “No, you know what? Lot of animals, we have a lot of animals in our house, and that helps too.”

And Jerry isn’t exaggerating when he says “lots” of animals. “We have a lot of rescues in our house,” the ‘Billions’ star told us. “I believe we’re over the legal limit, I hope you don’t report us. I mean, I’m going to tell you how it goes. My wife gets an email, sometimes from Much Love Animal Rescue, and they say ‘We need a…we need someone to foster this dog for a little bit’ or ‘This dog is about to be put down and we need someone to take this dog’, and my wife says, ‘We’re getting another dog,’ and I say ‘We’re not, we don’t have room. Don’t do it.’ And then I come home and the dog is there and I’m mad, just for an evening. And then usually me and the new dog become inseparable. 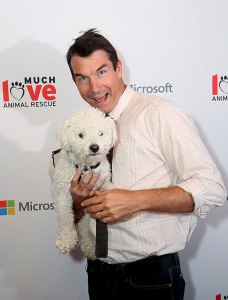 “They’re just so much fun. And if you don’t want to make a full commitment you can foster for a little bit. You know, though there funny thing called foster fails where it’s like, you’re going to just foster a dog but then it’s a failure because the dog ends up staying with you the whole time. It’s really cute. Our household is one large, well if you were to name our house it would be foster fail.”