There’s major congrats in order for Wendy Williams, who received her star on the Hollywood Walk of Fame today, October 17! The talk show host, 55, arrived to her official ceremony looking like a star, literally. Wendy’s stylist William Sinclair chose a stunning Dolce & Gabbana black sheer dress for the occasion. The gown, which she thanked Sinclair for choosing because it covers her legs and lymphedema, featured white star patterns throughout. The award-winning veteran host stunned with a long, blonde wig, as she teared up on stage listening to her dear friends recap her iconic career thus far.

When she finally took the podium, Wendy admitted, “I do not have a prepared speech.” She said she was going to keep it short for fear of crying. Wendy went on to credit part of her success to the advice she’s listened to through the years. Wendy also thanked her good friend, radio host, Elvis Duran, along with her manager and, of course, her Wendy Show staff in Chelsea, New York.

“The elephant in the room knows that I’ve had a tough year,” Wendy admitted. Fans of the host will know that she filed for divorce from her husband of nearly 22 years, Kevin Hunter Sr., in April after he fathered a child with another woman. Nonetheless, Wendy is on the mend. 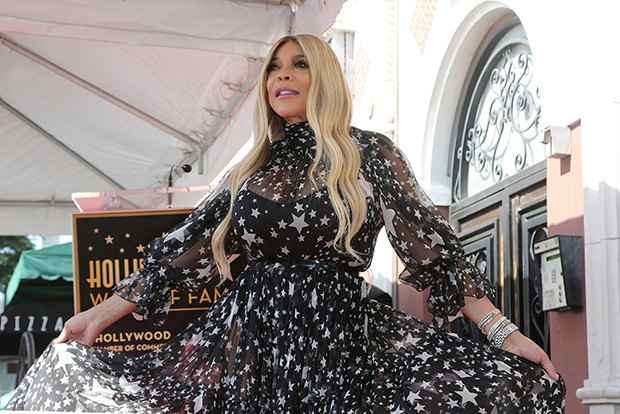 Wendy Williams shows off her Dolce & Gabbana dress at her star ceremony on the Hollywood Walk of Fame on Thursday, October 17, 2019. (Photo credit: Willy Sanjuan/Invision/AP/Shutterstock) 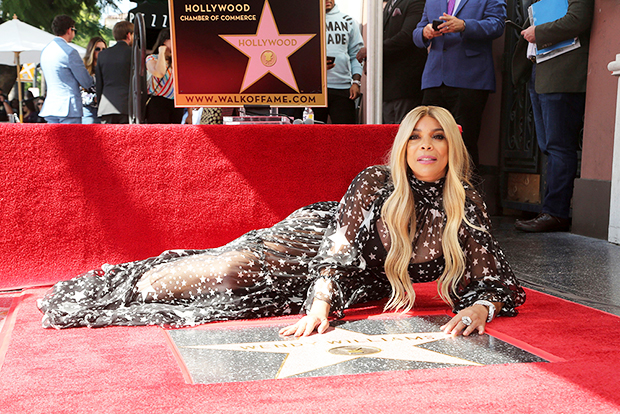 Wendy Williams poses with her star on the Hollywood Walk of Fame on Thursday, October 17, 2019. (Photo credit: Willy Sanjuan/Invision/AP/Shutterstock)

“Slowly but surely I’m climbing out of the pit and this is one of those monumental days,” she said of the special day, which has since been declared as Wendy Williams Day in Hollywood. “If you don’t believe in yourself who is going to believe in you?”, she continued. “Sometimes life is a very lonely path and you have to make some hard decisions,” she said before introducing her son, Kevin Jr. to everyone in attendance at the event.”

“I want to give some love to my son Kevin. It’s me and you kid,” an emotional Wendy said. “Kev’s only 19 so he only knows me doing this… He only knows mom up here… Somehow he always tells me I’m just mom… There’s one person here that knows, you know you now, there’s no place like home… Thank you Kevin.”