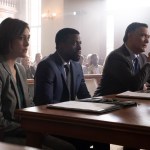 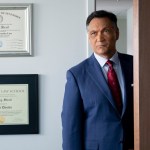 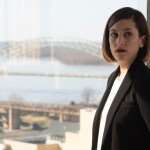 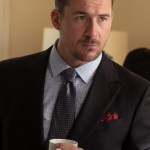 ‘Bluff City Law’ is ready to change the world. HL spoke with star Caitlin McGee about the complicated father-daughter dynamic at the center of the show and why the series is more than just a legal drama.

Bluff City Law premieres Sept. 23 at 10 p.m. on NBC. The series follows a father-daughter duo Sydney and Elijah Strait, lawyers at an elite Memphis law firm who specialize in controversial landmark civil rights cases. But as we all know, families are complicated. That’s definitely the case for Sydney and Elijah. Their complex past has left them estranged, but in the wake of a mutual loss, they know they have to work together to make a difference in the world.

HollywoodLife sat down EXCLUSIVELY with Caitlin McGee, who plays Sydney, during the Television Critics Association summer press tour to talk about all things Bluff City Law. She revealed that the first season will dive deep into Sydney and Elijah’s “estranged relationship” and the personal lives of those who work alongside them. Caitlin also discussed their courtroom dynamics, which will either help them or hurt them. She opened up about filming in Memphis and the city is a character all its own.

When we start this journey, where is Sydney in her life?
Caitlin McGee: I think Sydney and her dad [played by Jimmy Smits] have an estranged relationship. At the top of this show, it’s really hard for her to forgive him and vice versa for the choices that they’ve made, so it takes a lot for them to come back together, but I don’t know that she’s super happy with the choices she’s made. I think it’s just come out of necessity for self-preservation. She cares so deeply about her clients and about the people that she fights for to the extent where it really takes over her life. I mean, as you see very quickly, she’s divorced and estranged from her father and she’s working for a firm that is pretty soulless. I think there’s a long way for her to go to sort redeem herself in the eyes of her fellow co-workers at the firm as well as herself.

Regarding her estranged relationship with her father, over the course of this season, are we really going to peel back the roots of that estrangement?
Caitlin McGee: Yes. I think the most exciting thing about this show is that we are a legal drama, but really, we’re a family drama. It’s more about the people than it is about the courtroom. In the pilot, obviously, it’s a lot of establishment. But it’s really about our relationships and especially with Elijah and Sydney, I think they’ve had so much history together and so much of it is behind the curtain, so much of it is within the four walls of their home and only Sydney and maybe Della know about it. I think as we get to know more about their history, people are going to be a little more enlightened on why they made the choices that they have made.

They have an estranged relationship outside of the courtroom, but how are they in the courtroom together? Is there a difference there for them?
Caitlin McGee: Yes. They approach things very differently. Sydney is a spitfire. Elijah plays by the rules because he realizes that sometimes it takes honey to get a bear. It’s not necessarily with a rifle the way that Sydney enters a room, so I think when they’re on the same side and when they’re in sync, they’re unbeatable. But when they’re not in sync, that’s when things start to fray. At the beginning of the pilot, at least, we have a lot of respect for each other. He’s still asking me to come back to his firm and to work for him because he knows how good I am at my job, but it’s hard for us to figure out a good dynamic and how to gel together again.

Is there an element with Sydney, being in the same field as her father, that she’s trying to prove herself to him?
Caitlin McGee: Yes. Every daughter looks up to their father and puts them on a little pedestal, for the most part. I can’t speak to all, but I personally put my own father on a pedestal. I love him. I worship him. I’ve always wanted to make him proud, so even in her darkest moments, she still on a visceral level wants to make her dad proud, especially in the courtroom. I made sure to have moments of feeling like a 10-year-old who just wants to make my dad smile and for him to say, “You did a great job today.” Sydney got into this because she wants to make him proud. No matter how far she’s strayed from that, he’s her dad. That’s the bottom line.

Why do you think Memphis was the perfect place to set this show?
Caitlin McGee: Memphis is a character in the show in itself. It’s a really significant city in our country’s history and I think being civil lawyers and taking on these civil rights cases, there isn’t a better place to do it than where MLK did his Mountaintop speech. If you ever go to Memphis, you have to go to the Civil Rights Museum. It’s one of the most haunting and intense places I’ve ever been, but it also is so informative and powerful of how far we still need to go. I think if there’s ever a place to set civil rights lawyers, it’s Memphis.

What can you tease about the other characters on the show in Sydney’s life?
Caitlin McGee: We have such an amazing ensemble. We have such an amazing cast. I mean everyone from Jayne Atkinson, Barry Sloane, MaameYaa Boafo, Michael Luwoye, and Stony Blyden. We get along so well, which is so nice. We actually seek each other out afterward. But also on top of that, all of us for the most part, came from theater and we all love that sort of ensemble feeling of a cast and each and every one of us within the upcoming episodes is really affected by a case. Something really touches home for us. I’m just so excited for us to get to dive into the personal lives of all the people at these firms because it really is about the people. It’s about our firm as a family, not just the family of me and Jimmy, so I think that’s going to be really fun.