Zooey Deschanel is moving on with Property Brothers star Jonathan Scott, following her split with Jacob Pechenik. The pair was spotted holding hands as they arrived at Little Dom’s restaurant in Silver Lake, California on Sept. 13, and HollywoodLife obtained EXCLUSIVE photos of their outing. “Zooey and Jonathan kept looking at each other and smiling and sat closely, cuddling constantly throughout their meal. They looked very happy and casual,” an insider spills EXCLUSIVELY. “They seemed giddy about one another and held hands as they arrived and whispered to each other often. It was really sweet.”

In the pics, the two look quite cozy while enjoying each other’s company. The dinner date between Zooey and Jonathan comes just one week after HollywoodLife EXCLUSIVELY confirmed that Zooey and Jacob had split. “They sat next to one another at a booth near a window. Zooey looked beautiful. You could tell they just wanted to be totally normal and low key as they dined at Little Dom’s in Silverlake,” the source revealed.

Back in August, Zooey and her sister, Emily Deschanel, filmed a Carpool Karaoke segment for James Corden with Jonathan and his brother, Drew Scott, which is where the actress first met Jonathan and they hit it off, according to our source. “They started out as friends,” our insider explained. “They’ve been out a few times and seem to want to keep the romance on the quieter side. It’s pretty new still. They seem to like each other a lot and Jonathan travels a lot, but they see one another when they can. They both seem pretty happy and into it so far. It’s still very, very new. She’s been separated for several months from Jacob. She’s just very private. It’s still very new and she wasn’t really looking to date, but she and Jonathan hit it off unexpectedly.“ Zooey was married to Jacob for four years before their split earlier this summer. 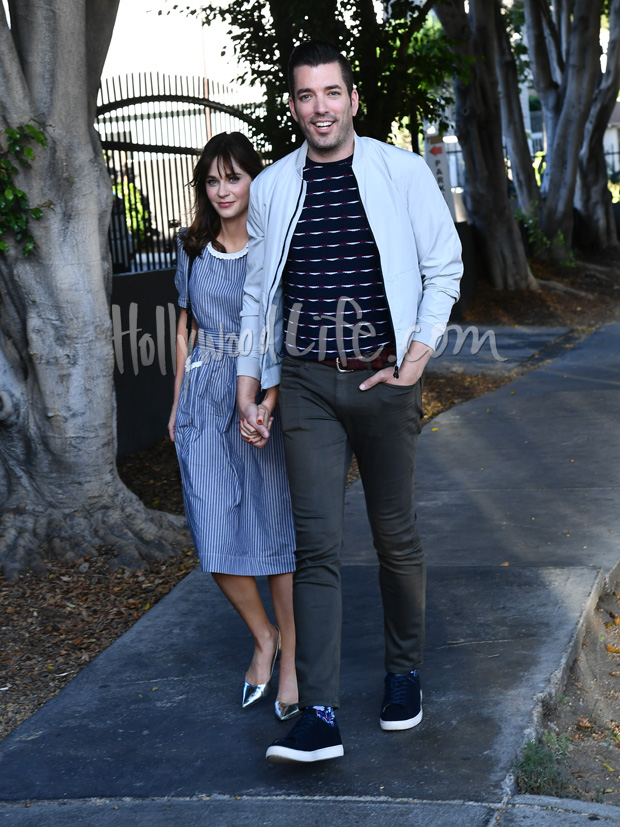 Zooey and Jacob were engaged in January 2015, and they got married six months later in June. They have two children together — their daughter, Elsie, who was born in July 2015, and their son, Charlie, who was born in May 2017. The pair confirmed (via a rep) to HollywoodLife EXCLUSIVELY that they are committed to co-parenting their youngsters after their separation.

Meanwhile, Jonathan was previously married to Kelsy Ully, who he dated for several years before tying the knot in 2007. The pair split in 2010 and eventually finalized their divorce. He also previously dated Jacinta Kuznetsov, but they ended their relationship in 2018.