Watch out, LeBron James — Khloe Kardashian is coming for your taco Tuesday throne! The Good American designer, 35, was photographed heading into Mexican hotspot, Plata Taqueria & Cantina in Agoura Hills on Tuesday, wearing the sexiest outfit — the Relent leather jumpsuit from Mistress Rocks (and, it’s only $118!). She was joined by best friend Malika Haqq, along with a body guard during the lunch outing.

The Keeping Up With The Kardashians stars coordinated in all-black looks. Khloe stunned in a head-to-toe leather outfit that included pants and a long sleeve button-up that was belted at the waist. She rocked open-toe snakeskin-printed green heels with a criss-cross strap at the ankle. As for her accessories, Khloe stood out in oversized rectangular sunnies with a flat top, and she carried a camouflage Louis Vuitton bucket bag. 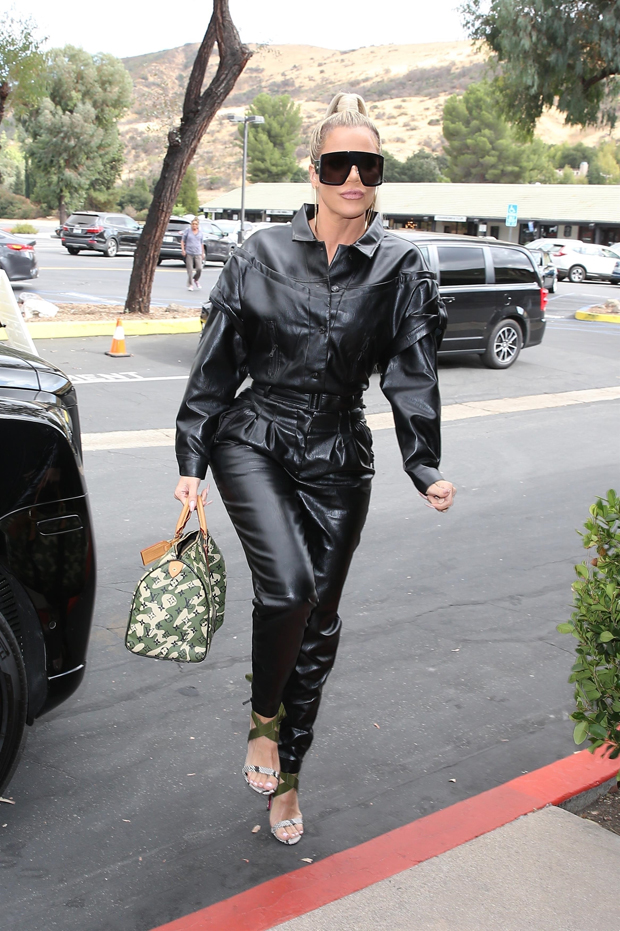 Khloe Kardashian in an all-black leather outfit while out to lunch with Malika Haqq in LA on Tuesday, September 10, 2019. (Photo credit: BACKGRID)

Khloe’s latest leather outing came just after the season 17 premiere of Keeping Up With The Kardashians on Sunday, September 9. During the episode, Khloe was still dealing with the aftermath of her split from ex, Tristan Thompson, who is also the father of her daughter, True Thompson. Fans of the show will know that the two ended their relationship after Tristan’s cheating scandal with former Kardashian family friend, Jordyn Woods.

“I still have not spoken to Tristan face-to-face. And, right now, I’m not ready to,” Khloe admitted at the start of the episode, which featured True’s birthday party where she saw Tristan for the first time since the scandal. “I know I’ll get to that place. Right now, it’s really challenging and tough for me.”

Later on in the episode, Khloe also revealed that Tristan tried to kiss her when she pulled him over for an off-camera conversation. After he asked her to have “a glass of wine,” Khloe described the awkward encounter.

“And then he was like, ‘Can I have a hug?’ And then I one-arm hugged him and he was like, ‘One? A one-handed hug?'” Khloe explained to her glam team. “I was like, ‘That’s nice enough.’ And then he tried to kiss me and I go, ‘This is the problem with you. You can’t just take what you get.'”