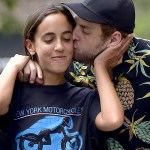 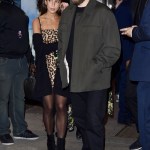 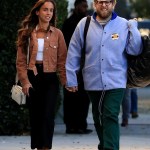 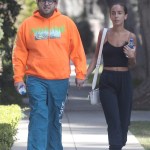 On the same day news broke of Jonah Hill’s purchase of a $6.77 million home in Santa Monica, the ‘Superbad’ star reportedly made another commitment — a promise to marry Gianna Santos!

One of the funniest men in Hollywood gets to make Gianna Santos, 30, laugh for life. Jonah Hill, 35, is now engaged to the content manager at VIOLET GRAY, a commerce beauty company, a rep told Page Six on Sept. 3! Not many other details were offered about the private couple, who have been reportedly dating since the summer of 2018 (sorry, no proposal pictures on Instagram). However, Jonah’s friends are said to be “buzzing” over the engagement news, according to the report! HollywoodLife has reached out to Jonah’s rep for comment.

The low-key couple was last seen leaving New York City’s Crosby Street Hotel en route to breakfast at The Smile on Labor Day, Sept. 2. They were first seen together in the same city in July of 2018! Gianna’s alma mater, Fordham University, is nearby — she graduated with a degree in communication and media studies in 2011. Since then, she has held stints at HBO and worked as a head stylist and producer for KITH NYC, a celebrity-favorite brand, before landing her current job (this is all according to her LinkedIn profile).

Jonah certainly has room for another person at home. The 22 Jump Street star just offered $6.77 million for singer Jesse Jo Stark’s four bedroom, Southern Colonial-style home in Santa Monica, which our sister publication Variety reported on Sept. 3! Jonah’s career is moving just as successfully as his personal life. The comedy Good Boys — think a sixth-grade version of Superbad — was met with a fresh rating on Rotten Tomatoes after landing in theaters on Aug. 16, and was produced by Jonah and the likes of longtime pals like Seth Rogen! Jonah also most recently starred in the 2019 comedy The Beach Bum, which starred Matthew McConaughey.

Before Gianna came along, Jonah had last dated artist Erin Galpern. They were seen vacationing together in Cabo San Lucas in Jan. 2018, where Jonah showed off his recent weight loss after gaining 40 pounds for the 2015 film War dogs.