The biker shorts trend is in full swing, so it’s understandable that the always fashionable Sophie Turner would step out in the stylish look while out in NYC on Aug. 19.

Biker shorts are the new yoga leggings. If you want proof, just look at Sophie Turner’s recent go-to hangout outfit! Sophie, 23, opted for black drawstring shorts that could’ve been worn for the Tour de France while grabbing lunch with her husband Joe Jonas, 30, and friends in New York City on Aug. 19. The Game of Thrones actress stuck to the biking theme in a black Harley Davidson T-shirt, and a pair of Adidas slides helped the outfit nail that delicate balance between casual yet chic.

Sophie has been enjoying the NYC heat while it lasts, because this isn’t the first time she has worn biker shorts in the concrete jungle this summer. On Aug. 15, Sophie wore Alo Yoga’s white biker shorts to attend Joe’s birthday lunch. The actress was wearing those same shorts when Joe later planted a kiss right on her hand! These two tied the knot earlier this summer and they definitely seem to still be in the honeymoon phase.

Meanwhile, Sophie’s not the only star to rock the biker shorts look — Gigi Hadid was JUST spotted in a similar style while out with Tyler Cameron earlier this month. Like Sophie, Gigi paired skintight biker shorts — hers were blue — with a relaxed fit top for a day of fun with pals in NYC on Aug. 5. Unlike the HBO star’s graphic tee, however, Gigi dressed up the casual look with a cropped white blouse with flared sleeves, a layering of necklaces, including her favorite Axiom Chain from Missoma and Versace’s $795 Cross Chainer mesh and suede trainers. While each lady applied her own unique touch to the biker short trend, both looked fashion-forward and fabulous. 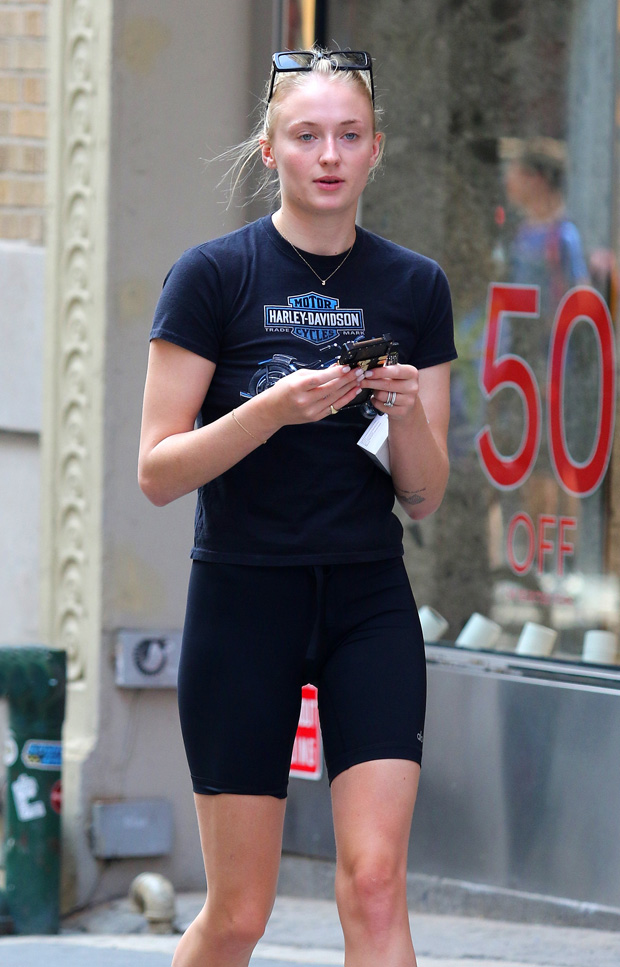 Now that Game of Thrones is over, Sophie has had some time off this summer, and has taken advantage of the time to spend with Joe. The Jonas Brothers recently started their Happiness Begins tour, and Sophie has been seen at several shows to show support. Not a bad life, right?!