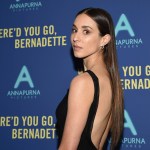 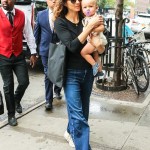 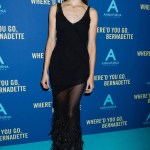 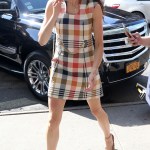 ‘Pretty Little Liars’ star Troian Bellisario stepped out in public with her new baby daughter for the first time in New York City on Aug. 13 and it was truly precious.

Troian Bellisario, 33, was on mommy duty when she was seen walking with her sweet baby daughter in New York City on Aug. 13! The Pretty Little Liars actress has been very private about the tot since having her in Oct., and hasn’t even announced her name yet, so it was a treat to see the mother-daughter duo together for the first time in public. Troian looked comfortably casual during the outing in a black shirt with quarter sleeves and jeans and sunglasses while her precious baby girl, who had a pacifier in her mouth, wore a onesie and blue and white shoes.

Despite being private about the pregnancy and birth of their daughter, Troian and husband Patrick J. Adams, 37, who she married in 2016, still share some moments with their fans on social media. Troian recently opened up about her difficulty with breastfeeding after giving birth in a post on Instagram. She shared a photo of her in the middle of the act on Aug. 6 and included some thoughtful words.

“I would never have thought something so simple would be so complicated,” her post read. “My milk came in immediately (so lucky!) my daughter has always eaten well (little bit of reflux but all good) and breastfeeding her was never painful or frustrating (SO RARE) but the mastitis, waking up in the middle of the night to pump😴, pulling off on the freeway to pump, or hiding in dark corners of houses while pumping or else I can’t sleep it’s SO PAINFUL.”

She went on to admit that despite the difficulties, she feels it’s an “honor” to be able to feed her daughter in this way and has “loved every moment” she gets to spend with her in that way.

We look forward to seeing more moments with Troian and her baby girl in the future!