UPDATE (8/15/19, 4:15 p.m ET): The Chrisleys’ attorneys, Bruce H. Morris and Stephen M. Friedberg, have released the following statement — “For quite some time now, the U.S. Attorney’s Office for the Northern District of Georgia has been conducting an investigation of Todd and Julie Chrisley based for the most part on the demonstrably false allegations of a former officer of a company they owned jointly. We saw the results of this effort yesterday—an indictment against Todd, Julie, and their accountant that relies largely if not entirely on emails that we know Todd never sent but rather were fabricated by this former employee.

“This individual, identified in the indictment only as ‘Co-conspirator A,’ first approached federal authorities in 2012, claiming he had evidence that Todd had been trying to avoid paying his taxes. What the authorities didn’t know, at least initially, was that he had been fired by the Chrisleys after they discovered he had been falsifying documents, forging their signatures, bugging their home, and intimidating other employees into covering up what amounted to a multi-million-dollar embezzlement scheme. These and many other criminal misdeeds were detailed in a federal RICO suit that the Chrisleys filed against him in 2012. Ironically, it was this lawsuit that sent him to the U.S. Attorney’s office. He wasn’t looking for justice but for revenge and his “evidence” against Todd consisted mainly of falsified documents.

“Now, seven years later, the government has granted this individual immunity from prosecution for his own crimes and used his false allegations to bring an indictment against the Chrisleys. We have no doubt that if this case ever reaches a courtroom, Todd and Julie will be completely exonerated. But in the meantime, their reputation will be sullied by a shamefully unjustified prosecution based on testimony of a dishonest source who has somehow managed to successfully mislead prosecutors.”

UPDATE (8/13/19, 6:30 p.m. ET): USA Network has not cancelled Chrisley Knows Best despite a report that claimed otherwise, a source EXCLUSIVELY told HollywoodLife. The second half of Season 7 is expected to premiere this fall, the insider told us.

ORIGINAL STORY: Charges of conspiracy, bank fraud, wire fraud and tax evasion rounded out the 12-count indictment that Chrisley Knows Best stars Todd, 50, and Julie Chrisley, 46, were hit with on Aug. 13. The reality television couple’s accountant, Peter Tarantino, was also charged with tax-related offenses, according to the press release that the Northern District of Georgia’s Department of Justice issued. “Todd and Julie Chrisley are charged not only with defrauding a number of banks by fraudulently obtaining millions of dollars in loans, but also with allegedly cheating taxpayers by actively evading paying federal taxes on the money they earned,” U.S. Attorney Byung J. “BJay” Pak said, which was included in the statement.

Todd and Julie are facing a number of accusations that trace to “at least as early as” 2007. The couple allegedly provided “false information” to banks to receive “millions of dollars in loans” roughly between 2007 and 2012 (an estimate), and then went on to allegedly use “fabricated bank statements and a fabricated credit report” to obtain a lease for a California home in 2014. The legal troubles only pile on — Todd and Julie have also been accused of allegedly not filing “timely” income tax returns in 2013, 2014, 2015 and 2016. A more detailed account of these allegations is laid out in court documents, which you can read here. HollywoodLife has reached out to Todd and Chrisley’s rep for comment, but didn’t hear back by the time of publication.

Related: Todd Chrisley’s Kids: Everything To Know About The 5 Children He Shares With Julie

The indictment didn’t blindside Todd. He even predicted the charges would arrive just one day before the grand jury handed them over, but accused a former employee in putting him and his wife in this current legal jeopardy. “There’s been a cloud hanging over Julie and me and our entire family for the past seven years. It all started back in 2012, when we discovered that a trusted employee of ours had been stealing from us big time,” the USA Network star, who’s also a real estate investor, began his public message that was shared to Instagram on Aug. 12. Todd went on to allege that this former employee created “phony documents” and forged signatures before he was fired. 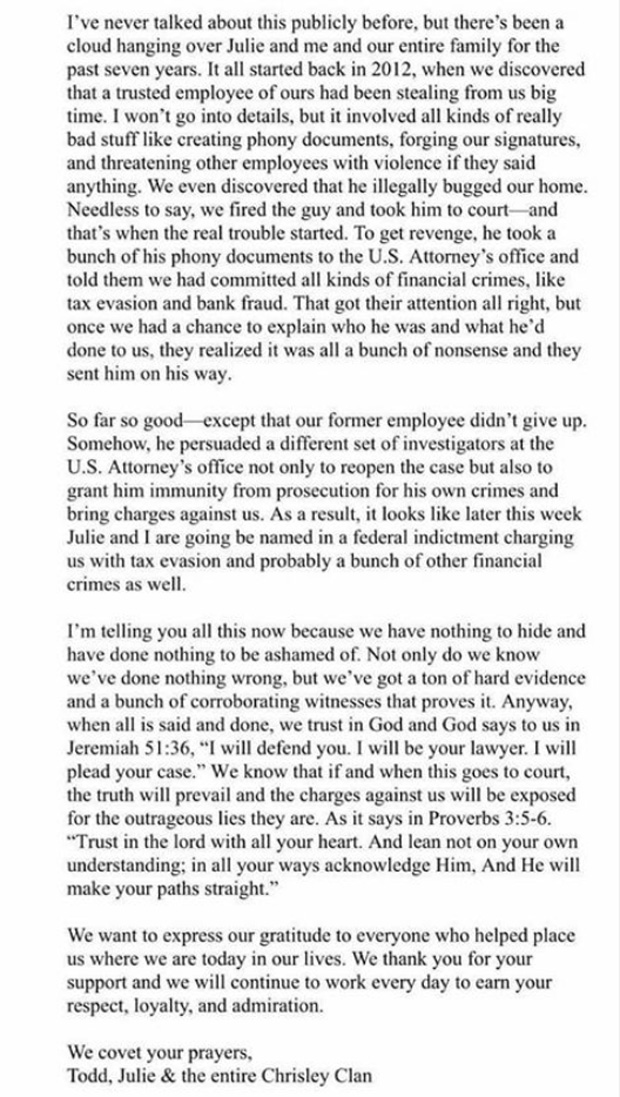 As “revenge,” the employee allegedly brought his alleged fabricated material to the U.S. Attorney’s office and claimed his former bosses “had committed all kinds of financial crimes, like tax evasion and fraud,” according to Todd, which matches the indictment’s charges. The family man claimed that the employee was dismissed, but he “persuaded a different set of investigators” to reopen the case against him and Julie. “We have nothing to hide,” Todd later added, denying all the accusations in the indictment, and even added that he and Julie have “a ton of hard evidence and a bunch of corroborating witnesses that proves it.”

In response to her father’s message above, Savannah Chrisley, 22, showed her support in the comments section: “Thank you for being YOU! You have and always will be the glue that holds us all together. God has a much bigger plan for all of us and this is just part of it. Thank you for being the most loving, kind hearted, and honest father. You will forever be my bestfriend…now let’s let God do the work. HE will never forsake us ❤️.” Todd and Julie also share two sons, Chase, 23, and Grayson, 13, and Todd has two other children (Lindsie and Kyle) whom he shares with his ex-wife Teresa Terry. The wealthy and large family can be followed on their reality television show Chrisley Knows Best, which is in the middle of airing Season 7.