What happened to Nina Dobrev? The Vampire Diaries alum, 30, was spotted on crutches while leaving a hot pilates class in Hollywood on Sunday. She wore a black support boot on her left foot as she made her way out of the class. Nina also seen at the InStyle Day Of Indulgence party later in the day, still on crutches.

It’s unclear how the actress injured her foot. However, she still managed to keep up with her workout regimen. Nina, who has not yet spoken out about the injury, was all smiles in a new photo (seen below), despite her injury. She was dressed in black leggings and a tank with her hair tied back in a ponytail.

Nina shared photos and videos to Instagram on Sunday while boating with friends. While her crutches or boot were not visible in the snaps, she did share a mirror selfie on her Instagram story, where her support boot was back on her left foot. We’re sending well wishes to the actress and hoping for a speedy recovery! 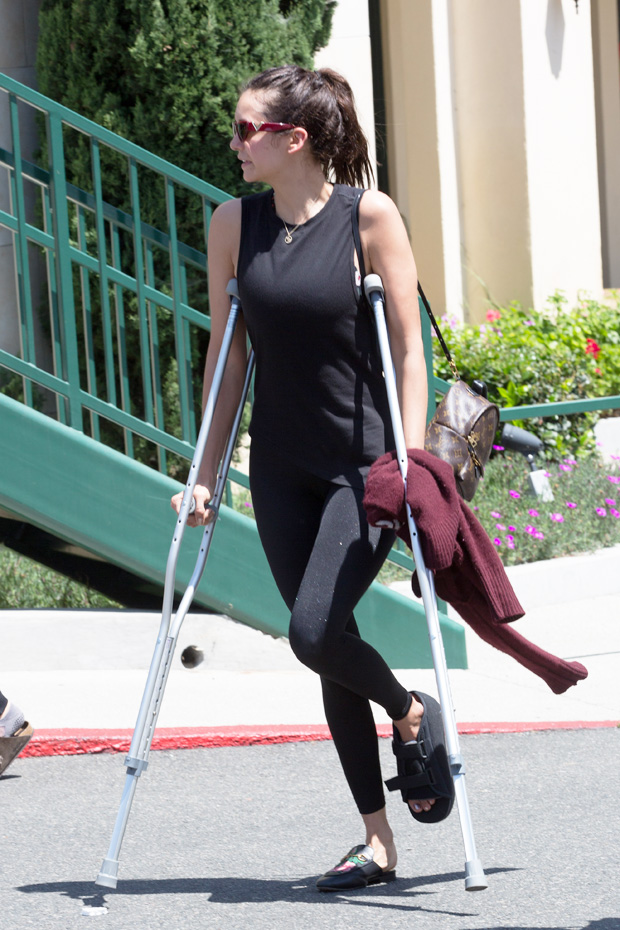 Nina Dobrev is seen on crutches while out in Los Angeles, CA on Sunday, August 11, 2019. (Photo credit: MEGA)

Nina’s injury came just weeks after she made headlines when she revealed that she “despised” her Vampire Diaries co-star, Paul Wesley, 36, when they first met. Nina admitted that the duo, who played on-screen lovers in the hit show, had great chemistry on camera, but it was a different story when they weren’t filming.

“Paul and I didn’t get along at the beginning of the show,” she told co-hosts Candice King and Kayla Ewell on the June 10 episode of the Directionally Challenged podcast. “I respected Paul Wesley, I didn’t like Paul Wesley. And I remember everyone would walk up to me after the show aired and they’d be like, ‘Are you and Paul dating in real life?’ Because everyone thought that we had such good chemistry,” Nina explained. “I realize now that there’s a fine line between love and hate, and we despised each other so much that it read as love but… we really just didn’t get along for maybe the first five months of shooting.”