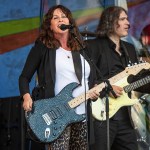 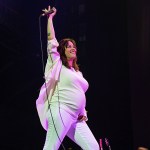 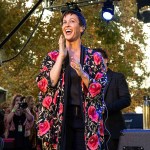 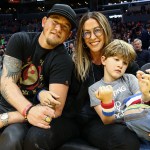 He’s here! Alanis Morrisette and husband Souleye welcomed their third child, a son, into the world, and he’s absolutely adorable. We couldn’t be happier for the couple!

We’ve got some Alanis Morissette news you oughta know: the singer just gave birth to her third child, a darling baby boy named Winter Mercy Morissette-Treadway! Alanis, 44, shared the happy news with her fans on Instagram on August 12, announcing that she and her husband of nine years, rapper Souleye (real name Mario Treadway) welcomed their little bundle of joy into the world. It goes without saying that their new child is absolutely beautiful. “He’s here. Winter Mercy Morissette-Treadway. #8/8/19,” the singer captioned the exciting announcement. Souleye also revealed the news on his Instagram, writing, “You will forever be my heroine. thank you for your warrior strength and ability to so deeply love.” He added that, like their other two children, Winter Mercy was born at home.

Alanis announced her pregnancy in an Instagram post on March 25, 2019. She already had a sizeable baby bump when she broke the news! The Grammy-winning “Ironic” singer posted a black and white photo that showed her dressed in a tight, black turtleneck while recording music in a home studio. She captioned it “So much NEWness…” So exciting! Souleye immediately commented on the post with a series of red heart emojis, and her fellow celebs chimed in, too.

Alanis and Souleye have two children together: eight-year-old son Ever Imre Morissette-Treadway, and a daughter who is almost three, Onyx Solace Morissette-Treadway. Alanis revealed in a June 2019 interview with Self that she didn’t have the easiest time getting pregnant, and suffered miscarriages along the way, as well as postpartum depression. “Between Ever and Onyx there were some false starts,” she told the magazine. “I always wanted to have three kids, and then I’ve had some challenges and some miscarriages so I just didn’t think it was possible… I felt so much grief and fear. I chased and prayed for pregnancy and learned so much about my body and biochemistry and immunity and gynecology through the process. It was a torturous learning and loss-filled and persevering process.”

Congratulations to Alanis, Souleye, Ever, and Onyx on the new addition to their family!