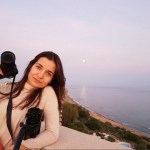 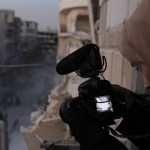 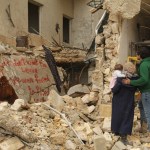 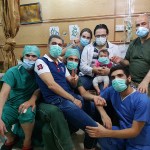 Imagine falling in love, getting married and having a baby in a war zone. Journalist Waad Al-Kateab did all of the above, all while holding a video camera in her hand.

Two men massage a baby’s chest so the infant – who is lying in an incubator – can breathe and inhale oxygen. Russian bombs target a hospital, smoke fills the air and a mom frantically calls out for her daughter while she, her husband, medical staff and patients head down to the basement for shelter. A woman wails and carries her son in her arms after he was killed in an airstrike while playing outside in the streets of Aleppo, Syria. Through this all – the dust, death and destruction – one woman is a constant presence, camera in hand, filming everything.

The woman is Waad Al-Kateab – a journalist, wife and mother. The harrowing footage that she shot from 2011 until 2016 has been turned into the award-winning docu-film, For Sama. Now 28, she was the mom who was frantically calling out for her daughter, Sama, as bombs shook the makeshift hospital where her husband, Hamza Al-Kateab volunteered at the height of the Syrian uprising. Ask her why she never put her camera down, why she shoved aside fear to document what she saw and Waad’s answer is simple. “I was filming everything. Everything,” she tells HollywoodLife EXCLUSIVELY. “I was just wanting to capture as much as life as I can, because at any moment, I felt that, next minute, I will not be alive. So, it doesn’t matter if you [are] scared or not. There’s nothing to do to not be scared, or there’s nothing to do to be protected in this place.” She adds, “I was feeling all the time, ‘I have [a] camera, I’m filming. So, I’m not safe, but I’m safe…’ I’m doing something really important and that’s what [kept] me going all the time.”

For Sama, which is in theaters now, is partly an open letter to Waad’s daughter, but it’s much more. The filmmaker started shooting footage of the uprising in Syria during the 2011 Arab Spring, on her cell phone at great personal risk. “Just to film anything in the university at that time, it was a crime,” she says, explaining life under the harsh Bashar al-Assad regime. “And you could be arrested or killed. We’ve had thousands of people who were protesting at the university who’ve been…we’ve seen them shot.” The regime denied that such atrocities were happening. Waad filmed to prove that they were.

Despite this risk the couple (who fell in love and got married while filming For Sama) remained committed to the revolution, the quest for democracy and freedom. They moved to the non-government controlled East Aleppo. Waad, with her film camera always in her hands, captured the life and death moments in the hospital that Hamza and their friends manned to help their fellow citizens who were being massacred by Russian, Asaad-supporting bombs.

In this bittersweet film, Waad captured their romance, their wedding, her joy at finding out she was pregnant with Sama and the challenges she faced caring for her baby as a first-time mother – normal things that we all experience, happening in extraordinary, often gruesome circumstances.

For Sama comes out at a time when the fate of refugees in particular is a hotly debated issue on both sides of the Atlantic. In the U.S., Syrians are on President Donald Trump’s travel ban, which targets mostly Muslim countries. But Waad, Hamza and Edward Watts (the British filmmaker who co-directed the documentary) hope the film highlights the similarities between Americans and Syrians. “Hamza always [says], ‘I’ve never dreamed of being a refugee when I grow up,’” says Waad who now lives in London with her husband, Hamza, 32, Sama, now 3, and youngest daughter, Taima, 2. “People think that this [is an] opportunity, but it’s not. We were dying until we [arrived] here… If the war really stopped in Syria, if the regime and Russia will be [held accountable for] what happened, we all will be back.”