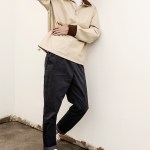 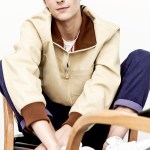 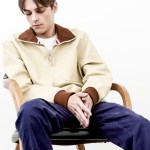 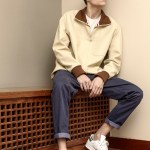 Corey Fogelmanis is starring in the all-new episode of ‘Into The Dark: School Spirit.’ He spoke EXCLUSIVELY with HL about levels and layers to his character, what he loves about the horror genre and more.

The new episode of Hulu’s Into The Dark: School Spirit will premiere Aug. 2. Corey Fogelmanis, 19, stars as Brett, one of the students stuck in weekend detention who are confronted by the school’s legendary hauntings. Corey sat down with HollywoodLife EXCLUSIVELY to discuss the all-new role. He admitted that he loved exploring Brett’s “many levels” and “learned a lot about levels of emotion” while getting into character.

Into The Dark: School Spirit isn’t the only horror project Corey has taken on this year. He also opened up about his role in the Octavia Spencer-led Ma, which was released in May 2019. Corey loves diving deep into the horror genre and feels like “you can really push the boundaries with it.” In addition, Corey reflected on his time playing Farkle on Girl Meets World and talked about his upcoming guest spot on Chopped Junior.

What stood out to you about the role of Brett in Into The Dark: School Spirit that made you want to take on the role?
Corey Fogelmanis: I feel like he’s just such a sweet kid and I really feel for him. He likes to follow the rules and he wants everyone to be safe and respect the school. I just feel like he’s a good influence on people and I hope that I embody some of that in my life with my friends and the people that I surround myself with. But it was also the product in general. I love the show. I feel like before I even had the role, I was really excited at the prospect of doing it because it’s super out of the box and I feel like they’re telling really weird, risky, and wacky stories, which is cool because I feel like it’s awesome to take risks. Sometimes it works, sometimes it doesn’t, but at least they’re trying. I feel like most of the time with them it really works, so I applaud them for that.

How would you say the role challenged you as an actor?
Corey Fogelmanis: I think with each new character that I’m able to play, I’m able to step into roles that are more multifaceted. So with this one, he has so many levels and layers and it’s cool, especially coming from Disney sitcom where it can be very one-note at times. It is really awesome to start getting the opportunity to just challenge yourself in that way and then to have levels of darkness and all the other things to show growth in my work as I’m growing in my life.

Is there anything in particular that you learned from this character, maybe about yourself?
Corey Fogelmanis: I think just from a very technical acting standpoint, I learned a lot about levels of emotion. When you’re filming with cameras, it’s a very different experience than like theatre or in an acting class because you have to do multiple takes and you have to be ready when they need you. What I found really interesting is that you can be totally there and ready and then they’ll be like, “Oh sorry, we need 10 more minutes. There was something wrong with the lighting.” And so you’d have to stay there. It’s really a mind game and it takes so much focus and that’s not something I was aware of before because I just never had the opportunity to do that as a character before.

You recently start in Ma. Do you find yourself drawn to horror?
Corey Fogelmanis: Yeah, I guess so. It’s either some signal that I’m sending out or a signal somewhere that I’m being sent and I receive it well. But yeah, that seems like the projects that have clicked with me. It’s cool. I’m not complaining because it’s really fun.

Horror has become a really pivotal genre, especially in the past few years. Why do you think the horror genre is so appealing to people?
Corey Fogelmanis: There’s a lot of reasons I think. I think first and foremost, it can be really effective. I think people when they watch something, they want to feel something, so I think it does a really good job of that. But then also, there’s a lot of layers to it. I think you can say a lot with horror without being as straightforward as you would be in a comedy or a drama. You can really push the boundaries with it, so it almost feels like there are no boundaries. You can just go as far as you want. You see that a lot with so much of the stuff Blumhouse is doing. I think it’s really cool. I’m happy to be a part of the genre.

Octavia Spencer is obviously one of the best actresses in the game. What was something you learned from her while working on Ma?
Corey Fogelmanis: So much stuff. It was really crazy. She really took on the mother role in a way. She’s been doing this for so long and so I really feel like she took us kids under her wing and every day it was something different. Whether it was a money management talk, save your money, be smart about it, or she talked to us about agents and reps and how to deal with that and making tough decisions. It was things like that. The thing that I took away the most was the way she carried a set. She was obviously our number one, so the way she captained that ship. She came in every day with great energy and she was always super communicative about what she needed that day. So if it was something emotional, she would be like, “This is what I’m doing today. From you guys, it would be really helpful if you were this or that.” So it was really cool that she voiced what she needed so we could show up for her in that way. That was really awesome for me because I was on the receiving end of that and so now I can take that with me. So I have that reference for the rest of my career.

You started on Girl Meets World and you’ve branched out into these projects like Into The Dark. What’s your next goal?
Corey Fogelmanis: I don’t know if I have anything really concrete. I think I want to continue doing projects and playing characters that challenge me and allow me to grow and allow me to play with the life experience that I feel like I acquire as I go on. Because I think that’s cool. I feel like so much of acting comes from life experience and so it would suck not to be able to use that.

Speaking of life experiences, are you a cook? Because Ted Allen teased that you’re going to be on Chopped Junior.
Corey Fogelmanis: I’m a novice at this point, but I’ve been cooking for a couple months now.  I was a judge and it was amazing. I’m so inspired by those kids. Yesterday, we had two 10-year-olds and two 11-year-olds. I felt so inspired and also inadequate comparing myself to them.

On the Girl Meets World front, do you think ever about where Farkle would be today?
Corey Fogelmanis:  I don’t think about it, but if I had to, I would hope that he’s happy. It’s been interesting looking back on him. I feel like he’s such a sweet, loyal friend. When we were shooting the show, I don’t know if I really valued those aspects of him as much as I could have. And so because of that, I don’t think he did because I wasn’t really thinking that. So I hope he’s confident and he’s coming into himself and I hope he’s at college for something that he loves.

There are so many revivals and reboots happening right now. Would you be up for a Girl Meets World reboot down the road?
Corey Fogelmanis: Down the road, I would. I feel like right now it would be too soon. But yeah, I think that would be really cool to see just how our characters have changed over the years because even just in the couple of years since we wrapped the show, I feel like a completely new person. Sabrina [Carpenter] and I have grown up a lot together and separately. Everyone’s having their own things. Danielle Fishel just had a baby and so I would love to work with everyone again.