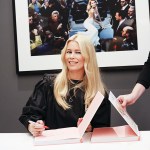 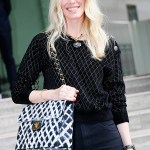 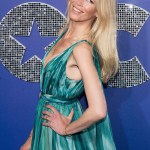 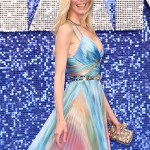 Claudia Schiffer found quite a way to mark a quarter century passing since her first ‘Vogue’ cover. She bared her incredible 48-year-old body wearing nothing but a carefully placed clutch and heels.

German model Claudia Schiffer was one of the hottest models of the 1990s, being among the elite crew including Cindy Crawford and Naomi Campbell where the term “Supermodel” was coined. The 48-year-old is now celebrating 25 years passing since she landed her first Vogue cover by showing age is nothing but a number. She posed completely in the buff for the August cover of Vogue Italia, holding a black clutch to cover her breasts while she dangled a pair of fluorescent green heels over her privates down below. Her body looks as incredible now as it did when she broke into the modeling business 30 years ago.

The cover is “Claudia by Claudia” with the first name written along her left side in black cord while the other side featured words in cutout pink letters stapled against the basic plain backdrop. In another cover version she wears a black blazer with nothing underneath, as she holds on to her bare hip to push the fabric aside. She’s not the only 90s supermodel to participate in the shoot, as Stephanie Seymour, 51 also posed nude for the magazine’s issue. She covered her breast with her arms while a carefully placed camera hit her lady bits.

Claudia landed her first Vogue cover in 1994 for Vogue Spain. It was a close up shot featuring a natural, fresh-faced look with minimal makeup while she wore a simple white tank top. By then she had made a name for herself in the global campaigns for Guess? jeans and denim which with her stunning Brigette Bardot inspired looks that launched her to international fame. Claudia went on to appear on the cover of over a thousand magazines worldwide as one of the most in-demand faces on the planet. In 2002 she married British film producer Matthew Vaughn and they have three children, son Caspar, 16, and daughters Clementine, 14, and Cosima, eight.

SHE IS BACK ✨ CLAUDIA BY CLAUDIA @claudiaschiffer back on our cover after 25 years! in @ysl photographed by @collierschorrstudio styled by @vanessareidofficial! Check out our August Issue on Newsstands August 6th! “The concept was to take the framework of some of Helmut Newton’s most seminal studio shoots, especially the “auto-portraits”. Theoretically, the women in these photographs by Newton were “making” their own portraits in that very brief moment that they are looking at themselves in mirrors and releasing the camera’s shutter with a cable release. The idea for my story evolved into me stepping into the shoes of Helmut Newton and being shown in the mirrors’ reflections, photographing Claudia and Stephanie.”(…) “When you are photographing women such as Stephanie and Claudia, who are literally like the walking lexicons of fashion gesture in photography, there are things they will and will not do. There’s not one thing that you see in these photographs that Claudia didn’t want to do – if she didn’t want to do it, she changed it.” #CollierSchorr See more via link in bio. Full credits: #ClaudiaSchiffer @dmanagementgroup Editor in chief @efarneti Creative director @ferdinandoverderi Casting directors @pg_dmcasting @samuel_ellis @ DM Fashion Studio Interview @pimcharlottecotton Make-up @hiromi_ueda @artandcommerce Hair @garygillhair @streetersagency Manicure @louimarie_nails @jaqmanagement Set design @tomotattle @streetersagency Executive producer @sylviafarago

Photographer Collier Schorr wrote in the magazine of photographing the two icons, “Because of who I am and who they are, I think these shoots are about women’s acknowledgement of their own sexuality…And is very different to the representation of desire, which is always connected to the maker of the picture. I think this was about Claudia, Stephanie’s and my relationships with our sexualities and bodies, and about being seen as older women.

She added, “When you are photographing women such as Stephanie and Claudia, who are literally like the walking lexicons of fashion gesture in photography, there are things they will and will not do. There’s not one thing that you see in these photographs that Claudia didn’t want to do – if she didn’t want to do it, she changed it.”