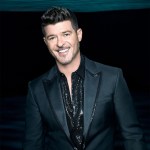 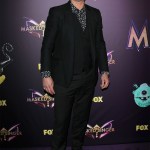 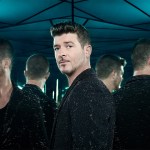 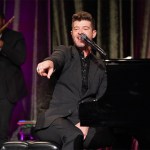 It’s a new era for ‘Blurred Lines’ hit-maker Robin Thicke. HollywoodLife caught up with the singer to hear about his stunning new single, making music after tragedy, and how he manages to balance family life with a bustling career.

It’s been five years since Robin Thicke released his last full-length album, Paula, but new music is indeed on the way, he assures HollywoodLife. We caught up with the 42-year-old singer following the release of his soulful new track, “That’s What Love Can Do,” to get get the scoop on the song’s meaningful lyrics, and when fans can expect to see his highly-anticipated record.

For the singer, inspiration behind his emotional new track runs deep. “Well, I’ve always been a romantic. I always liked songs about love and spirituality and people getting closer together,” he explains, when asked about his choice to return with a ballad. However,the amorous song wasn’t solely penned for his fiancé, April. “It was actually my father, he passed away two and a half years ago and I wanted to write something that honored him and then I started writing it, and it become about all of the love in my life. Some of the lyrics are supposed to be about my son, and some to April, some to my father,” he tells us about the song, which has since reached No. 1 on Urban AC radio.

While Robin is proud of his past work, “That’s What Love Can Do,” marks his first hit after going independent, and his gratitude is instantly detectable. “Well, you know I’m really proud of my albums with Interscope and before then and Jimmy Iovine, who was a great mentor to me and a great support to me. Even when I wasn’t selling records he always stood by me and kept supporting me. So, losing some of that, you definitely feel something like leaving the nest, in some ways. But I’ve been very blessed to have a great, new family at Roc Nation,” he says. “And — I hooked up with Ghazi [Shami] at Empire and I started to feel that sense of family and that sense of, you know, a great record label also with management team and with the two of them working together, it’s been a great success.”

Robin, who lost his house in the November 2018 California wild fires, talks candidly about his setbacks as he forges ahead with his new record. “I’ve been writing a lot of songs over the last few years trying to get an album together. But every time I think that it’s finished, I realize that I have still more work to do on it,” he tells HollywoodLife. “I always pointed out, I don’t like to intellectualize it, I just go by feel. And most of the time, I’m talking about my life and I’ve been though a lot of ups and downs since my last album. I lost my father….my house burned down, the 2015 divorce, I got sued,” he says without missing a beat, “but, I have some new songs that will be out there pretty soon. [I’m] getting ready to shoot a video and that was with Yo Gotti that I’m really excited about,” he says.

“There’s a lot to talk about and that why with ‘That’s What Love Can Do,’ it was the perfect first single, because through all of those tough times, and all these challenges, it’s the love my family, my son, April and my mom, it’s my friends that got me through those tough times and still do. You know?”

While juggling a music career and a family (Robin has three kids, Julian, 9, Mia, 1, and Lola, 4 mos.) is no easy feat, Robin seems to have it figured out.  “Well, it’s exhausting to be good at it, he admits. “But it’s definitely worth it, my son is my favorite person in the world and April is an amazing woman and a great partner and a great mother. And, I have so much love and joy in my life that it’s worth putting in all that work. But it is very challenging especially with two little girls, two little babies and to try to manage my career and babies and take care of April. It is a lot of work but it’s well worth it,” the singer admits.

And while fans of FOX’s hit show The Masked Singer got well acquainted with Robin thanks to his time as a judge on the show in 2019, it’s his chart-topping track with Pharrell, “Blurred Lines,” that still is the most recognizable moment of the crooner’s career. Despite a nearly $5 million lawsuit involving the track — it’s a song that Robin still looks back on fondly.  “I don’t take pride in the fail, I think, I find solace in the quality and it is the great thing about that record is that even now when I perform it, as soon as they hear ‘boom boom’ and ‘everybody get up,’ people go crazy. If we’re able to make people feel that way and bring them that kind of joy and makes them dance, It’s worth it all.” The singer is sure to add that Pharrell is still one of his “great mentors and friends” and is “probably the greatest talent that I’ve ever been able to work with.”

Robin’s new single, “That’s What Love Can Do,” is available on all streaming services now.