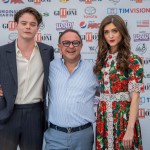 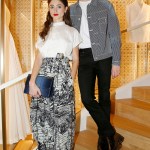 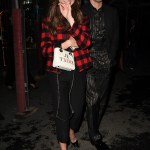 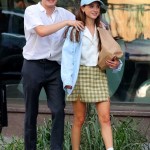 Natalia Dyer looked so beautiful in a floral gown while attending a film festival in Italy with her ‘Stranger Things’ co-star and boyfriend Charlie Heaton.

When in Italy, wear Italian! That’s what Natalia Dyer did while attending the Giffoni Film Festival in Salerno, Italy in a gorgeous Dolce and Gabbana floral dress. It featured red flowers and green leaves with a ton of lace accents. The dress had a large white lace Peter Pan collar, lace around the bottom of the short sleeves, a lace waistband and a strip of the fabric running up the front of the dress with red buttons on it shaped like rosebuds.

The 22-year-old Stranger Things star accented the dress with red heels featuring metallic bead strapping. She wore her hair long and in waves and her bright red lip looked perfect with the whole ensemble. Of course her best accessory was boyfriend and co-star Charlie Heaton, 25, who looked sharp in a black suit and white shirt on the red carpet.

The pair has been together nearly three years now, as there was speculation the two were dating in 2016 when the first season of Stranger Things dropped on Netflix and they played boyfriend-girlfriend duo Nancy Wheeler and Jonathan Byers. She posted cute pics of him on her Instagram account. In October of that year they went in matching costumes to Halloween, with Natalia as The Wizard of Oz‘s Cowardly Lion and Charlie as the Scarecrow.

Natalia and Charlie didn’t make their romance official until the following year. It was a simple act of PDA that showed the world they were in fact dating, as the two held hands strolling in NYC while being photographed by the paparazzi in October of 2017. It’s been smooth sailing for the cute couple ever since!