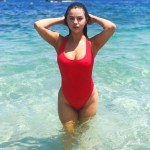 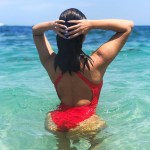 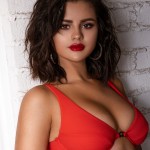 When Theresa Mingus, 29, interviewed to become Selena Gomez’s executive assignment in 2014 it was the start of a relationship that quickly turned into a beautiful friendship. The Krahs swimwear creator says it was a seamless transition, telling HollywoodLife EXCLUSIVELY that the former child star’s “down-to-earth” nature made it easy. “She’s just very fun and chill and herself and I love that about her,” Theresa says. “And so, I feel like that’s why we like clicked a lot.” But, when it comes to maintaining that friendship, the California native says the singer’s fearlessness is key.

“Fearless” is a word that Selena, 26, used to describe Theresa in an April 29 Instagram post when she praised the Krahs founder for launching her own business. “She has taught me how to see life in a fun, carefree and uplifting way,” Selena wrote. “She has shown me how to be a strong and fearless woman. She is beautiful, kind and smart.” For Theresa the feelings are definitely mutual. “Yeah, I love that,” she says. “I think that she knows how to be fearless and knows how to be fun. Sometimes it’s hard and you have a lot of pressure and a lot of eyes on you and I feel like sometimes you just need that person in your life where you could just be reminded, ‘Hey, this is really who I am.’ I feel like I did a really good job to remind her of that.” She adds, “Just make her feel like, ‘Hey, it’s all good, everything’s fine.’ And she’s literally done the same thing for me.”

It’s that determination to be herself that has helped Theresa ever since she moved to Los Angeles from the Bay Area in California and stumbled into the world of being a celebrity assistant – first with Robin Antin, the creator of the Pussycat Dolls in 2011, then with Kim Kardashian for two years, followed by an almost five-year stint with Selena. “She’s just so easy to get along with,” says Theresa, who is open and chatty in person. “She’s just very down-to-earth. You can see [from] the way she talks. And I’m from the Bay, so I feel like I’m down-to-earth and I like that about people.”

I met Theresa 5 years ago. We worked together and became best friends. She has taught me how to see life in a fun, carefree and uplifting way. She has shown me how to be a strong and fearless woman. She is beautiful, kind and smart. I saw how capable she was of achieving her dreams. I wanted nothing more than to see her pursue them and soar. And here you are making it happen T. I love you and I am so proud of you.

Speaking about the dynamics of their friendship, Theresa also says, “I started working with her and then we became really good friends and now she’s one of my best friends. I consider her like my family, and [we’re] so close.”

They’re such good friends that in 2018 Selena and Theresa decided to stop being boss and employee and just hang out together. It was in her capacity as a supportive pal that the pop star decided to collaborate with her former executive assistant to design a couple of pieces for Krahs, which launched in May 2019. Selena even interviewed Theresa in a short Instagram video to coincide with the big reveal.

Now the “fearless” pals are just enjoying being BFFs. After a brief trip to Punta Mita, Mexico to celebrate Selena’s cousin, Priscilla DeLeon’s bachelorette this summer, Theresa’s reaction was just like any other regular person hanging out with her girlfriends who doesn’t do this every day. She says, “It was so fun. I did not want to leave.”