With ‘RHOC’ OG Vicki Gunvalson being demoted to ‘friend’ status, she’s working on a new show with pals Tamra Judge and Shannon Beador.

When life gives you lemons, make lemonade. That’s what Vicki Gunvalson is doing after Bravo demoted the Real Housewives of Orange County OG cast member from full-time to “friend” status. The 57-year-old is working on a new show to get her back in the spotlight. She broke the news after sharing an Instagram video of pal and co-star Tamra Judge, 51, loudly waking up Vicki and Shannon Beador, 55, from a sound sleep after they allegedly kept her up all night. Now Vicki says that the three are working on putting their own show together.

The video appears to have been an outtake from the RHOC cast trip to Arizona’s Miraval Resort in March of 2019. Vicki captioned the July 13 post, “So funny. Part 1 of @tamrajudge videoing @shannonbeador and I after a late night #tresamigas #rhoc ‘wake up a**holes’ 😂,” and a fan commented “I am laughing so hard. You three need your own show together. Like for real!” and Vicki responded back, “Yep! Working on it.”

Vicki confirmed for a second time that she’s hoping to get a show featuring her two RHOC pals in another post where she shared a photo of the three of them enjoying drinks at a restaurant in Newport Beach. “Stay tuned for what’s coming up next with #tresamigas. I love these ladies.#ontour #toacitynearyou #woohoo,” she captioned the pic. A fan asked “The on tour things is serious or a joke lol” and Vicki replied “We are very serious. Working out the details now.” 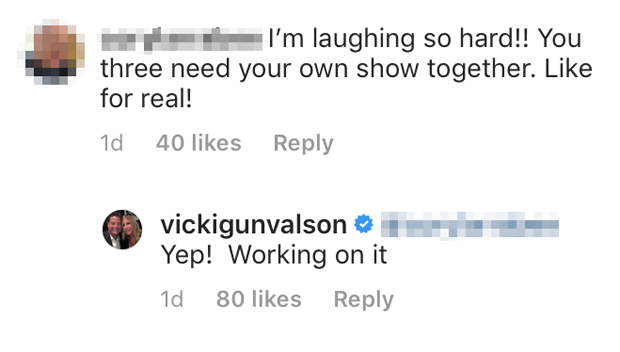 Vicki is still mystified as to why she was demoted on RHOC. In a July 6 Instagram post where Vicki shared a photo next to her fiance Steve Lodge, a fan asked in the comments “You were the first housewife? I don’t understand it? Why why why?” and Vicki responded, “Time to ask Bravo this question. I can’t seem to get an answer that makes sense either.”