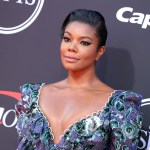 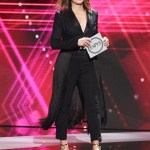 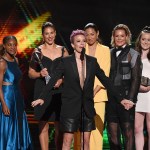 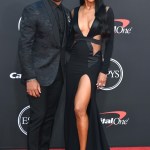 Megan Rapinoe’s open blazer showed off a little too much of her skin, while she leaned in to kiss her girlfriend Sue Bird at the ESPY Awards.

Megan Rapinoe, 34, is living her best life. The U.S. women’s team soccer player and team co-captain, who just won the World Cup, attended the Espy Awards last night in a deep v-cut black tuxedo jacket, and before she went to accept her award, her blazer revealed a little bit of her skin, including her breast (see the tweet with an image, below). Megan paid no attention to the accidental slip, though, and showed girlfriend Sue Bird, 38, some love before heading up to the stage.

Megan’s incident was on the East Coast coverage of the event, but it was taken out for the West Coast’s. Sandra Bullock, 54, presented the award for Best Team at the sport award show, and Megan joined her teammates to accept the award on stage. Megan danced while her team went up, and she looked incredible with her short purple ‘do, black shorts, white socks, and dress shoes. She had on a dark eyeshadow look, pink lipstick, and layered gold and silver necklaces.

Simply put, Megan looked incredible – which made sense, considering the team earlier in the day had the Women’s World Cup Parade in New York City after the team’s big win on Sunday. The huge star spoke at the award show.

“I’ve dropped the F-Bomb on every stage I’ve been on the last three days, so I’ll just spare you that,” Megan said. “Thanks for having us, everyone have an amazing night, peace out!”

Short and to the point – we can respect that! We can’t wait to see more of Megan, and her girlfriend basketball player Sue, in the future and we’re so excited for the entire U.S. women’s soccer team!