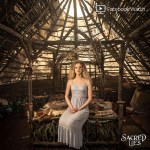 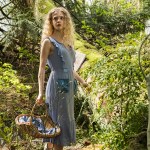 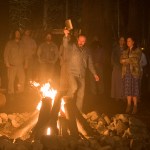 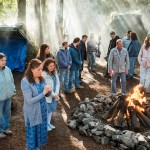 If you haven’t discovered the mystery drama ‘Sacred Lies’ on Facebook Watch about an enigmatic wild- haired teen girl, then get ready to get addicted. Creator Raelle Tucker tells HollywoodLife what inspired her and what Season 2 will focus on.

A teenage girl is found on a dark isolated road outside the Lolo National Forest in Montana. At her feet is a teenage boy that she has somehow pummeled into serious injury. The mystery is how she did it — she has no hands. That is the setting for the beginning of Episode One of Sacred Lies, a mystery drama web TV series which debuted on Facebook Watch last year and which has garnered a huge cult following of fans.

The series is the brainchild of Raelle Tucker, who previously wrote and produced True Blood and Jessica Jones episodes. It tells the story of that mysterious handless teenage girl, Minnow, who it turns out has grown up in a cult, led by a charismatic leader, ‘The Prophet.’ ‘The Prophet’ convinced Minnow’s family along with their neighbors, to give up all of their worldly possessions and follow him deep into the forest where they established an isolated settlement cut off from the outer world. Minnow was just a young child when she was left civilization and when she discovers the road and is apprehended by police, she is confused and curious about this new world.

The outside world, and Sacred Lies fans, are equally fascinated by Minnow.

Tucker tells HollywoodLife that she wanted to turn Sacred Lies into a TV show for two key reasons. First, because she was determined to give viewers, particularly women, a “complex female character.” “Too often, we are still playing by this idea that women are kind and gentle and good parents and they can’t do anything unlikeable, and they have to be really gorgeous and sexually desirable,” she points out in an EXCLUSIVE interview. “These stereotypes are still very much part of our female characters, and I really want to push against that because I think viewers want to see unique, strong, powerful women at the center of their shows.”

Well, Minnow is certainly complex — after all she beats a fellow teen to a pulp, but viewers also learn that she’s been tragically harmed in multiple ways by her parents decision to sacrifice all for the cult leader. Cults as a subject were the other reason, Tucker was drawn to Sacred Lies — she grew up in one. “It was really important to me to talk about blind belief, which is something that happens a lot when people join cults — they’ve invested so much in that cult, you spend so many years, you’ve given away everything you have. Everything is invested in this idea, and so getting out of it (a cult) seems way worse than anything,” she explains. “You’ll do almost anything to stay in the fantasy, because the idea that admitting that it was all for nothing, or might have been based on a lie is so much more terrible than any deed you have to commit to stay.”

Minnow and her family pay a huge price for their unwavering commitment to the cult and even after Minnow has escaped she has enormous difficulties mentally, breaking away from ‘The Prophet’. Tucker’s own experience of growing up in a cult was far less traumatic though the cult her parents were involved with — The Rajneesh Movement — actually was responsible for the largest bioterrorism attack in American history in Dalles, Oregon in 1984.

Fortunately, Tucker’s family didn’t live in the main commune in Oregon which was responsible for sickening 751 people — they were in a big house in Los Angeles, where Raelle played with 10 or 12 other kids living there. “For me, it was actually an idyllic time. I just remember it being a constant party… growing up wild and fun and everyone wore the same colors — red, orange and pink — and listened to tapes of this guy, Bhagwan Shree Rajneesh.”

It was only when the parents of a friend from school freaked out, realizing their daughter was having a playdate at a cult house, that Tucker realized that “my life didn’t look like anybody else’s life.” Raelle based Sacred Lies on the novel, The Sacred Lies of Minnow Bly, by Stephanie Oakes, which she had optioned several years ago, and which itself was based on the fairytale, The Handless Maiden, collected by The Brothers Grimm.

She has been thrilled with Facebook Watch as a platform for airing Sacred Lies. “It’s free and accessible to everyone in the world. You can send an episode to somebody in a text message,” she points out. She now spends time every week engaging with Sacred Lies 665,000 Facebook followers, even getting their input on decisions for her new upcoming season, like having fans decide the fictional location of the story.

For Tucker’s next Sacred Lies season, which is shooting now, she is adapting another Brothers Grimm fairytale, The Singing Bones. She has quite the lineup of stars for the new season: Juliette Lewis, Ryan Kwanten and Kristen Bauer and the plot focuses on a young woman (Jordan Alexander) searching for her family, after having been abandoned as a child.

You can be sure that once again, Tucker will have a season full of strong, complex female characters. “I want to put women in front of them (her viewers) who are not young women they see on the CW and on those shows — I’m not saying there’s anything wrong with them, but I wanted to put women in front of them whose concerns weren’t about their skincare or what shoes they were wearing. These are women that are surviving and fighting and actually living through terrible things, but becoming better people.”