Fans jumped to conclusions after seeing what appeared to be a dark mark under David Eason’s eye in a photo that wife Jenelle Evans, 27, shared to Instagram on June 18. “Why does David have a black eye ? Lmao,” one fan tweeted two days later, along with a zoomed-in shot of the discoloration. Jenelle didn’t appreciate the casual “lmao” tossed in, as the Teen Mom 2 star replied, “It’s not funny. It’s called vitiligo 🙄He has dark patches of his pigment that gets tan in the summer.” Although she soon deleted the clapback, she quickly shot down a suggestion that David “caught them hands” from another fan: “Because he has vitiligo?! Righhhht.”

Jenelle then had a request for her Twitter followers: “Making fun of someone with vitiligo is not cool. #JustStop ✋🏼.” As for what exactly vitiligo is, it’s a medical condition that “causes the skin to lose its natural color” and create patches of “lighter skin,” according to the American Academy of Dermatology. Celebrities like Winnie Harlow have vitiligo, and Michael Jackson also had this condition. The American Academy of Dermatology clarifies that it isn’t just a cosmetic condition since the “body attacks its own melanocytes,” which leads to the loss of color in various areas of the body.

Fans weren’t so convinced that David’s eye mark qualified as vitiligo, however. “That’s a bruise. vitiligo u coukd see on his hands till he got all those tats. You could see them when he was OUTSIDE ‘working’ in the SUN, which he claims holds him from getting a job bc he can’t be in the sun…..fishy fishy,” one fan speculated, while another fan brought up a quote from KidsHealth that read “vitiligo spots can’t tan” due to lack of melanin (contrary to Jenelle’s earlier tweet). In response to the suspicion, the mother of three shared another shot of David’s face, which appeared to have patches of light pink skin. 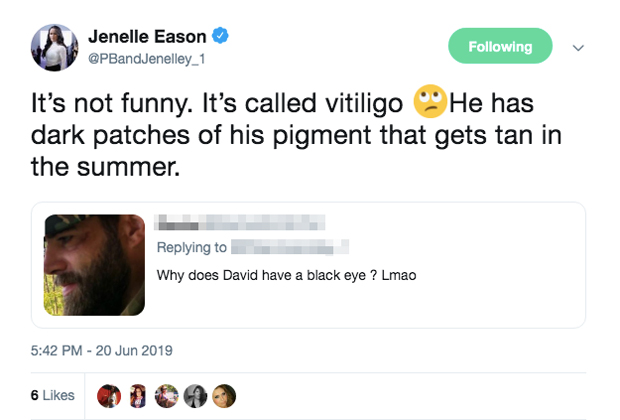 Before the vitiligo debate ensued, Jenelle was actually reminiscing on a memory of David with their daughter Ensley, 2, who is currently under temporary custody of Jenelle’s mom Barbara Evans. Jenelle’s eldest son Jace, 9, is also staying with his grandmother, while her other son Kaiser, 4, is currently living with his father Nathan Griffith. Jenelle lost temporary custody of her children at the end of May, shortly after David admitted to killing his wife’s dog, Nugget. David also reportedly lost custody of his younger daughter, Maryssa, who allegedly went to stay with her mother Whitney Johnson. The parents have been making repeat trips to court to regain custody of the kids, but spent Father’s Day without their brood.