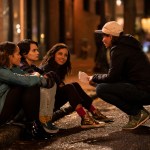 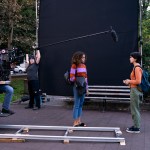 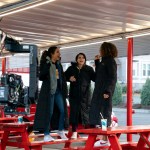 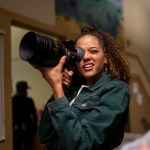 ‘Trinkets’ is Netflix’s newest teen drama that you need to be watching. HL spoke EXCLUSIVELY with EP and author Kirsten ‘Kiwi’ Smith about taking her book to TV, casting the core trio, and more.

Trinkets is totally your next summer binge. The 10-episode series from Netflix and AwesomenessTV will be released on June 14. The show follows three teenage girls from different corners of the high school cafeteria who find themselves in the same mandated Shoplifter’s Anonymous meeting. From there, an unlikely friendship forms. Elodie (Brianna Hildebrand), the grieving misfit; Moe (Kiana Madeira), the mysterious outsider; and Tabitha (Quintessa Swindell), the imperfect picture of perfection, will find strength in each other as they negotiate family issues, high school drama and the complicated dilemma of trying to fit in while longing to break out.

The show is based on the young adult novel by Kirsten “Kiwi” Smith, who serves as an executive producer. Kirsten is known for writing hit teen movies like 10 Things I Hate About You and She’s The Man, as well as Legally Blonde. HollywoodLife talked EXCLUSIVELY with Kiwi about the series, why teen dramas are so important, and more. Check out our full Q&A below.

Trinkets is based on your young adult novel of the same name. Had you always wanted to adapt Trinkets into a TV show?
Kirsten “Kiwi” Smith: It’s really funny because the initial idea that I had when I came up with the concept, I was thinking it would be a great movie. And then I didn’t write it as a movie and I ended up writing it as a novel, instead of writing it as a screenplay. So it’s really funny that now it’s become a show, but I think novels and TV are really. They’re nice kindred spirits because they are both kind of in it for the long haul, in terms of exploring the characters in a way that a movie is more finite.

At the center of the series is three girls played by Brianna, Kiana, and Quintessa. They are all incredible in their roles, I have to say. As someone who created these characters, what stood out about those three that made them perfect for each of their individual roles?
Kirsten “Kiwi” Smith: Well, Quintessa has this depth to them. Quintessa is just a deep human. In addition to being a beautiful human, they’re also rather very deep. So, they were perfect for the role because Tabitha has so many layers to unpack. Brianna as Elodie, she’s just a glorious, brilliant actor. Who was your favorite when you’re watching? Who were you identifying most with?

I loved Tabitha. I thought Brianna was great and it’s such a different role than what we’ve seen with her in Deadpool. So I loved her breaking out and doing a little bit something different. But just as someone who captivated me, I loved Tabitha from start to finish. I thought the character was so layered, and Quintessa did an outstanding job. This was their first major role.
Kirsten “Kiwi” Smith: That’s right. Actually, Quintessa had been at my house for a friend’s birthday party, and they didn’t talk to me. They said they were shy, and then later it was really wild because they just happened to be there. Later after they were cast, they were like, “I’ve been at your house before,” and I was like, “What?” They said like, “I didn’t really want to bother you.” I was like, “Why didn’t you say something?” So, I feel like it was destiny that Quintessa was cast because we were in each other’s orbit quite directly. Brianna, she’s so funny, even though she has to carry a lot of grief in the role, but she has so much comic nuance and subtle comic nuance, which I think is just great. Kianna is a force of nature as Mo and she drives so much with her energy that it was an instant lock in seeing her as Mo. I’m the luckiest author and producer and writer alive, really, to be able to have this group, and it extends all the way through the cast, really. Odiseas [Georgiadis] is amazing and Henry and Brandon. I love Kat Cunning, who comes in the middle of the story as a love interest for Elodie and brings her own music into it. I loved her as well.

Do the first 10 episodes complete your book or does it leave it open for more?
Kirsten “Kiwi” Smith: It covers a lot of it. There are a few things left in the book, a few different paths that we took in the show that left some characters behind from the book that we might pull into future stories if we have the opportunity to do so.

So you’re definitely considering a season 2? You definitely have stories ready to tell.
Kirsten “Kiwi” Smith: We have a lot of stories to tell, so if we’re so fortunate to get that, we’re armed and ready to go. I can live with these characters for a long time.

The book was written in 2013 and the show is debuting in 2019. Did you find yourself having to adapt to this era?
Kirsten “Kiwi” Smith: Oh my gosh, yes. Everything is quite different. The core emotional journeys are the same, and the writers that I collaborated with on the show, Amy and Emily, they were very loving about the book and continued to, as we were talking about the season, would bring up lines from the book and then episodes would be built around certain lines or moments from the book. So, they almost held onto it as a text in a really sweet way more than I did because I was like, “Let’s break free and go forth” and they’re like, “Nope, but wait, remembering your book, there’s this great scene.” They would be bringing the copies of the book with a highlighted passage that would then be read in the writers’ room. They’re just incredible and very endearing. I think it’s got an element of nostalgia that we’re trying to make it as authentic as we possibly can and also straddling the tone of really serious issues. Serious stuff is going on, but it’s never in a completely super pitch black way. We wanted to be earnest and warm and have this feeling that no matter how dark it gets that the friendship is going to be the thing that saves them.

Absolutely. As someone who watched 10 Things I Hate About You religiously, Larisa Oleynik is in this as well. Was this just a happy coincidence? How did this come back?
Kirsten “Kiwi” Smith: This is all by design. It was. I stayed in touch with her, of course, over the years. She’s brilliant and when we were talking about casting Shawn, it just seemed so perfect to me to have someone that was from a previous generation. She’s kind of an icon with playing Alex Mack, too, and I just love the idea that she would be then guiding these young women into helping them get on their path. So, it seemed like a neat thing to me that I was really excited to get her and I am glad you enjoyed that. I hope people find that kind of a little bit of a fun shout out and tie it together to her other work.

This is your first foray into television, right? What was that like for you going from doing movies to doing a 10-episode series?
Kirsten “Kiwi” Smith: I think it’s just like thinking in that longer form. Fortunately, I had written a novel so I was kind of thinking in longer form, but my brain is definitely trained to think in a three-act structure, so it was really great to be able to work in partnership to build out the season arc. Basically, when we first started talking about it, we talked about it as a long movie with three acts and then we had all these built-in, little micro cliffhangers into it just, even when we first started chatting about it. It’s a different muscle because you’re wanting to keep things going, whereas in a movie you’re wanting to tie things up. So it’s kind of like writing a very long second act of a movie because then the screenplay, there’s three acts. It’s like you’re writing a long second act but you’re putting in lots of cliffhangers at the end of episodes like novels. So, it felt like that to me. I’d been in a writers’ room very early in my career with Karen, my longtime writing partner, and we’d been on staff of the sitcoms. I had a general sense of how a writers’ room felt and looked and so that was good going into it. But really building up to, Amy and Emily and I kind of crafted the overview of the season together. It was crazy, though, because it’s just with a movie you can chill in your underwear and take your time. With TV, there’s a lot of aggressive deadlines that you have to be very responsible and meet all of that because it’s not just you in your skivvies dreaming up a movie. It’s a lot of people involved.

You’ve done many great movies about the teen experience. Why is it important to continue having teen dramas and looking into the teen experience, especially in today’s world when there’s just so much TV content and so much out there for young adults?
Kirsten “Kiwi” Smith: This is my favorite genre. It really always has been, probably because I started just getting addicted to movies when I was a teenager. So I think you kind of remain in that state of first love. The children are our future and I think this is a story that I like telling and these are pathways to a whole new generation. I’m really looking forward to kind of continuing to engage and be inspired by the younger generation because I want intergenerational communication to ramp up. I want to be able to keep learning from them so that we can just evolve into a better direction. But I really think also in terms of all of the teen stuff out there, I hope one of the things that people will like about the show is that it’s a half-hour show, which is normally like a comedy. But we’re more of a drama with a view and little funny bits here and there. I feel like I’m having a really juicy, easily digestible drama. That is something that I appreciate in a world where there’s a lot of shows that are quite long. I’m excited. I hope people respond to that. We’re giving you a lot in a short amount of time.