Russell Wilson, 30, is a Super Bowl champion, a 6x Pro Bowler, a former Rookie of the Year and, one of the best to ever throw the football in the NFL. But, life is so much more than the game now that he’s a father. The Seattle Seahawks quarterback and pet advocate — whose new PSA with the Banfield Foundation launches in September — shares daughter, Sienna, 2, with singer Ciara, 33. He is also a proud stepdad to her son, Future Zahir, 5, from a previous relationship. During an exclusive interview with HollywoodLife, Wilson shared how having a family changed his perspective on his career and on life in general.

“I came in the league and I didn’t have kids at first. I always wanted kids. — That’s one thing I always wanted and hoped and prayed for,” Wilson said. “Now, I have two, with (step-son) baby future. Being a step-dad, it’s the greatest blessing in the world.” Ciara has previously praised her husband for his special bond with her son — something she’s said was one of the main reasons she knew he was the one.

A third round pick out of the University of Wisconsin, Wilson was drafted the 75th overall pick in 2012 at the age of 24. He was fresh out of college and focused on creating a bright future for himself. And, he did just that. But now, he’s got a few other roles to juggle, and he couldn’t be happier. “You get to share this amazing memories with your kids and family,” he said, explaining that the football stands look way different now that he’s a father. “I get to see them after the game — three Seahawks jerseys — and they are all grinning ear to ear. It’s the best blessing in the world. I’m just so grateful for that!”

We caught up with Wilson as he was on location in Seattle filming his upcoming PSA with the Banfield Foundation, charitable arm of Banfield Pet Hospital, to educate and empower viewers to help create a world where victims of domestic violence and their pets can find safety together. Wilson is part of Banfield Foundation’s Safer Together™ PSA, which will drive awareness of the painful reality that pets, like people, are also too often victims in domestic violence situations. 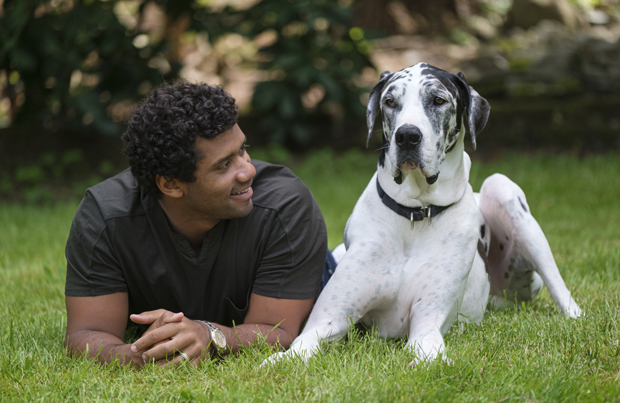 “The crazy thing is, when they called me about this opportunity, it was a no-brainer for me to be a part of it. Just hearing some of the statistics of it all, it’s really heartbreaking,” Wilson said, explaining, that “about less than 10% of domestic violence shelters allow pets.”

Related: Russell Wilson’s Parents: Everything To Know About His Mom & Dad

Wilson, who began taking his three Great Danes and his little Maltese to Banfield Pet Hospital years before partnering with the foundation continued: “So, the Banfield Foundation is able to help people live a safer life together with their pets and their families. It’s such an amazing thing.”

Wilson’s PSA launches in September in advance of National Domestic Violence Awareness Month. For more information on the Safer Together™ PSA, head over to the Banfield Foundation‘s official website.