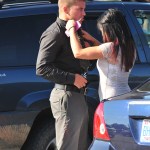 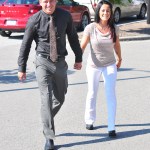 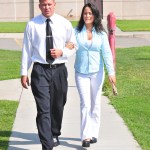 With 4-year-old Kaiser living under their roof, Nathan Griffith & his girlfriend have only gotten closer HL has learned, and there could even be wedding bells in their future!

Amid Jenelle Evans’ ongoing custody battle, her ex Nathan Griffith, 31, is housing their four-year-old son, Kaiser and apparently, it’s only strengthened his relationship with his girlfriend. Nathan and his lady, Ashley Lanhardt, have been together since 2017 but with little Kaiser in the picture, they’ve been thinking about marriage according to Nathan’s best friend, Katlyn McCormick, 28. The long-time pal of the former Teen Mom 2 star EXCLUSIVELY gave HollywoodLife an update on the couple’s loving relationship. When asked if the pair are in talks to get married, Katlyn replied with “absolutely,” before adding that “Ashley is one of the most supportive people I’ve ever met in my life.” She explained that this relationship is different than ones Nathan had in the past. “I’ve been around for Nathan’s prior relationships after Jenelle and nobody has ever supported him the way Ashley does. She truly cares about not only him, but she cares about Kaiser and she cares about his other daughter. She truly wants what’s best for all of them. She wants to make sure that all of his kids are taken care of and that she’s taken care of,” she told us.

So, when will wedding bells be ringing? “They talk marriage all the time. I don’t know when it’s going to happen but I know that Nathan loves her and he sees a future with her,” Katlyn explains. “Nathan tells me all the time within the next year he wants to propose to her. He’s never had anyone who supports him like she does.” The pal went on to explain that Ashley’s loyalty to Nathan is unwavering. “She will go to bat for him which nobody’s ever done before. Nobody’s ever defended him and truly meant it. Ashley makes sure that his character is never questioned.”

We probably could have guessed that thing are going well under Nathan’s roof just by seeing how happy little Kaiser is! Ashley shared an adorable Instagram video on June 5 that showed the loving relationship she shares with the tot. In the clip, Kaiser can be heard repeatedly telling Ashley how much he loves her and it was almost cuteness overload. “I love you Ashley, I love you Ashley, I love you SO much Ashley!” Kaiser can be heard saying in the clip, before making a kiss noise. The video is truly heart-melting!

Plus, Nathan is an incredible parent himself according to his Katlyn, who he’s known since 2013. Nearly a month after Child Protective Services  removed Kaiser from Jenelle and David Eason’s home in North Carolina, she claims that Kaiser is doing better than ever before. “He [Nathan] has really been able to take Kaiser out of his shell and change everything that he went through. Nathan truly is the best friend and guy I know. I FaceTime with Kaiser often and he’s in such a good place. His demeanor as a little boy has changed so much since being with Nathan. Kaiser is so happy and he even told me he isn’t scared anymore.”

As for Jenelle’s current situation — she just returned to court again on June 4.  Katlyn sympathized with her ex-friend but speculated why the mother of three keeps appearing before a judge. “I also watched the video where Barb [Jenelle’s mom] said Jenelle is playing everything up for the cameras and it’s true, she is. Jenelle couldn’t care less, she’s going to court because she has to because cameras are following her,” Katlyn claimed. “It’s Jenelle, she’ll just have another kid, that’s just how it is. She did it with Jace so she’ll do it again. If she doesn’t get her kids back she’ll just have another one.” Jenelle’s two other children, Jace, 9, and Ensley, 2, are currently living with their grandmother Barbara Evans (Barb).