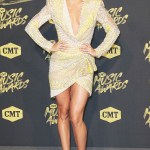 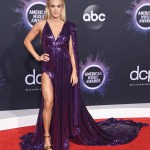 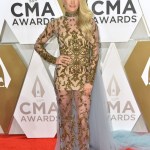 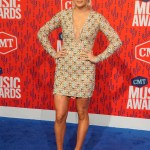 Carrie Underwood is back with a new music video & it’s one of her most personal yet! The country crooner enlisted her friends & family to film the clip, which showed them having some summer fun.

Carrie Underwood, 36, sure knows how to have a good time, and her latest music video is chock full of them! The country music songstress dropped her “Southbound” music video on June 8, and it will have you ready for summer shenanigans. The fun-loving clip showed her having an absolutely blast with some of her closet friends, and even featured an adorable little boy which looks like it just *might* be her four-year-old son, Isaiah.

The vibrant video arrived just three days after the singer hit the stage at the 2019 CMT Awards to perform the hit song. She stole the show at the awards ceremony as she took to the stage at Nashville’s Parthenon to give an incredible performance of  “Southbound.” For her set, she rocked a colorful top with a sequin hot pink skirt while belting out the lively tune. Of course, Carrie had everyone singling along with her!

It’s been quite the year for Carrie, and she’s been making her rounds non-stop with the smash single. She also performed “Southbound” when she graced the stage on American Idol for the show finale on May 19. Amidst her Cry Pretty 360 tour, Carrie stopped by the Idol stage to belt out the single and it was a high-energy performance that pumped up everyone in attendance! Carrie looked incredible in a sexy sequined dress, which featured a double leg slit so she could put some major skin on display. She sounded incredible while sparkling onstage, and she absolutely commanded the entire room. With the song getting major airplay and screen time, it was about time we saw a video for the track. Catch the lively new clip, above!