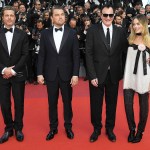 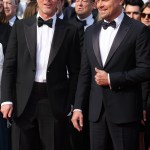 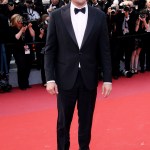 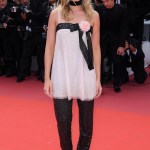 Brad Pitt and Leonardo DiCaprio’s personal bubbles were invaded as a cameraman got right in their faces amid a standing ovation after the screening of their film, ‘Once Upon A Time In Hollywood.’

Getting a little too close there, buddy. That’s the message Brad Pitt and Leonardo DiCaprio’s faces seemed to convey amid a standing ovation for the premiere of their film, Once Upon A Time In Hollywood, at the Cannes Film Festival on May 21. Unfortunately (or fortunately?) for Brad, 55, and Leo, 44, their film was that good, because the Cannes crowd’s applause never seemed to end. That allowed a generous amount of time for a cameraman to film extreme — and lingering — close-ups of Brad and Leonardo’s faces. Both actors desperately tried to avoid eye contact with the cameraman, although Brad did offer a little wave.

Fellow co-stars Margot Robbie, 28, and Dakota Fanning, 25, were treated to the same screen time. Dakota was the first to be filmed, who appeared to be suppressing a laugh and also avoided eye contact. Margot didn’t shy away from the camera, however, as her eyes flirted with the lens. Director Quentin Tarantino also used the same strategy and showed off his disco moves when the cameraman panned to him.

Brad and Leonardo looked a lot more smooth earlier on the premiere’s red carpet, with paparazzi cameras positioned a safer distance away. Once Upon A Time In Hollywood follows the fictional movie star Rick Dalton (Leonardo) with his ever faithful stunt double (Brad) as they adjust to a new Hollywood scene in 1969 Los Angeles, and the film will premiere in United States theaters on July 26.

Brad, Leonardo, Margot and Dakota won’t be the only familiar faces in Quentin’s latest flick. This is the last movie Luke Perry starred in before passing away from a stroke at the age of 52 on March 4, and Brad and Leonardo could still recall the butterflies they felt upon seeing the Beverly Hills, 90210 star on set. “That’s Luke f*cking Perry! We were like kids in the candy shop because I remember going to the studios and [Beverly Hills, 90210] was going on and he was that icon of coolness for us as teenagers,” Brad told Esquire in an interview published on May 21. Likewise, Leo said, “I remember my friend Vinny, who is in the film as well, we walked in and we both had this butterfly moment of like, ‘Oh my God, that’s Luke Perry over there!’”