The agony of Parkland student dad, Andrew Pollack is raw in After Parkland, a new documentary by filmmakers Emily Taguchi and Jake Lefferman, which premiered at The Tribeca Film Festival.

Pollack’s daughter Meadow was a beautiful 18-year-old senior at Marjory Stoneman Douglas High School, with plans to become a lawyer. She was her dad’s ‘princess,’ a courageous princess. When Nikolas Cruz went on his rampaging massacre on February 14th, 2018, he gunned down Meadow, shooting her four times in the school hallway before moving on to other victims. Pollack was still alive and crawled to a classroom door, desperately trying to open it and get inside for protection but was unsuccessful. When Cruz returned she bravely tried to shield a fellow student with her body and was shot five more times and killed, as was her friend.

This is the horror that Andrew Pollack now lives with every day and which is immortalized in After Parkland, a powerful record of not just what happened inside Marjory Stoneman Douglas, that terrible day but what has unfolded in the weeks and months following the sudden loss of 14 students and three staff members.

“Emily and I had both been on assignment for ABC News before, where we’ve been to mass shootings situations,” producer/ director, Jake Lefferman, told Hollywoodlife.com in an EXCLUSIVE interview. “But after each, we leave and we had questions, as any journalist would, about what the next months would look like. What would it look like for the family the next day?”

The pair who both work for ABC News, were inspired to follow the families and friends of the victims, with the support of ABC Documentaries, and that was the start of ‘After Parkland.’ Taguchi and Lefferman began to interview students who were in the school during the shooting. “I remember sitting down with Sam Zeif (a senior at the time) who was in the building that was attacked and he was on lockdown, and then minutes later realized that his little brother was in the same building, two floors up, coming under fire, literally where his little brother’s teacher was killed, and texting each other, possibly what might be their last good-byes, which thankfully, didn’t end up that way. It was an interview that you never forget, where, we’re looking at each other, and it felt like the air was knocked out of our lungs.” 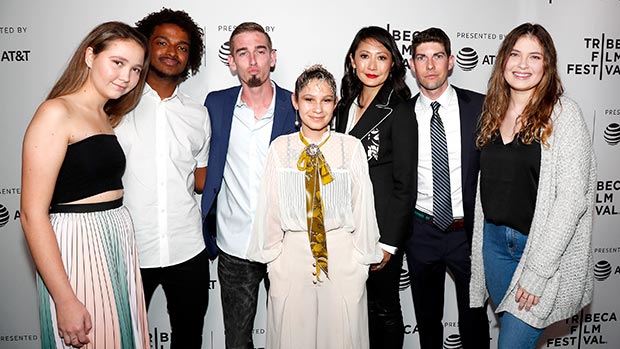 “We were taken aback by the experiences that they (the students) went through, and just how articulate Sam was both in the details and kind of a long view significance,” she added. The long term significance is exactly what Taguchi and Lefferman have captured in the film which follows a small group of families and friends of the victims, through the funerals, visit to the White House to confront Donald Trump, through the growing student activism, the massive March For Our Lives in Washington, D.C. on March 24th, through the summer of 2018 March For Our Lives: Road to Change bus tour across the country to publicize the issue of gun violence and then finally to the good-byes as some of the survivors embarked on a “normal” next step — college.

Andrew Pollack, and the parents and girlfriend of the charismatic Joaquin “Guac” Oliver, who was gunned down at 17 in the massacre, fiercely try to channel their unbearable pain and loss into positive actions as they struggle to cope with their grief. Andrew tries, tries to get through to the president in an Oval office meeting where he begs for more measures to improve school safety.

“My daughter, I’m not going to see her again… she’s in the King David Cemetery…we need our kids to be safe, I would have been there everyday”, he cried to Trump. Joaquin’s father courageously continues on coaching his son’s high school basketball team because he and the other players know that that’s what ‘Guac’ would have wanted.

Joaquin’s girlfriend, Victoria Gonzalez heartbreakingly, turns his photo into a necklace which she wears every day. She dries flowers from the last Valentine’s Day bouquet he gave her and wears them in her hair.

David Hogg, who famously livestreamed the sounds of the massacre from his classroom drives himself relentlessly, beyond exhaustion, to speak out to the media, demanding gun safety laws. He reveals that he’s speaking for his sister Lauren, who lost 3 close friends in the massacre, and can’t stop crying.

His mother worries that he is barely eating as he rises before dawn to go and do another major TV interview, vowing that he and his fellow students will convince politicians to change gun laws, despite becoming a target for internet haters. “You see moments where he is reflecting on some of the hate he receives online and it absolutely takes a toll. But I think what’s incredible, is that he was able to channel that into activism  for change,” explains Lefferman.

The filmmakers reveal that the Parkland families felt strongly about cooperating with the directors, including the parents of Brooke Harrison, 14, whose classroom was shot up by Cruz. Three of her friends, who sat directly in front of, beside and behind her were killed, and she was trapped with her dying friends and other classmates for what felt like hours, on that terrible day.

“They all have a very strong conviction that they don’t ever want to see this again…,” Brooke’s father told the filmmakers. “You guys are getting the poison out,” says Taguchi.

After Parkland hasn’t landed confirmed distribution yet, but it is a must- see. Hollywoodlife will let you know how and when to see it, as soon as we know.  While the film is a portrait of trauma and grief, it is also an inspiring testament to courage, strength, love  and the resolve to change America for the better.