Is Jeremy Meeks a single man? — That’s the question some onlookers at the Cannes Film Festival had when he stepped out with Romanian model, Andreea Sasu, on Tuesday. The pair posed together, where they were photographed arm-in-arm, looking quite cozy atThe Dead Don’t Die red carpet premiere. See the photo, below!

While Jeremy (aka, “Hot Felon”) and Andreea may have looked like a couple at the annual festival, it appears as though their joint outing was strictly business. The two models were both dressed in all-black Extremedy Couture looks by Madi Abaida, which signifies that they were most likely promoting the fashion house. Both Jeremy and are featured on the brand’s Instagram, modeling its edgy Italian apparel. Ahead of their red carpet appearance, Jeremy was photographed out to lunch with Andreea and one another person while dressed in a white t-shirt from the brand. They previously walked the runway at the Extremedy fashion show in Dubai in February.

Despite his presumed work venture, Jeremy raised eyebrows at Cannes because his fiancee, Chloe Green was recently photographed without her diamond engagement ring. Chloe —the daughter of British retail billionaire businessman, Sir Philip Green, who is the owner of retailers, Topshop and Topman — shared a ringless photo of herself to Instagram on April 30. 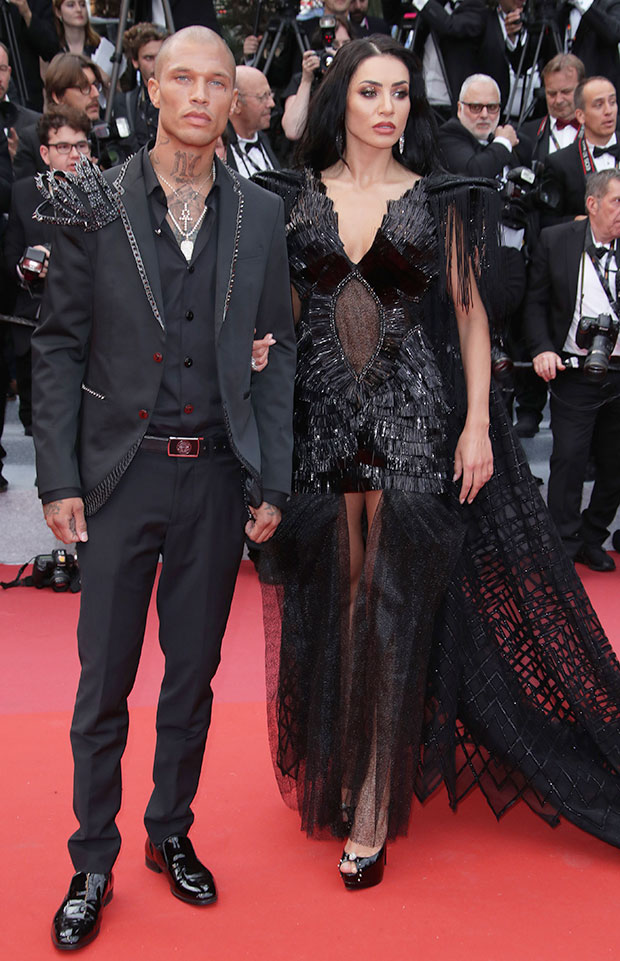 Jeremy Meeks & Andreea Sasu pose on the red carpet together at the Cannes Film Festival in France on  May 14, 2019. (Photo credit: REX/Shutterstock)

Jeremy and Chloe were the subject of split rumors last month. But, she quickly squashed any assumption of a breakup when she shared vacation photos of the two in Thailand. The couple welcomed a baby boy together in May 2018, 11-month-old Jayden.

Jeremy first became involved with Chloe while he was still married to his ex, Melissa. Back in July 2017, Meeks headed to Turkey for a modeling gig, where he was photographed kissing Chloe on a yacht. Upon his return to the states, he almost immediately filed for legal separation from his wife — a move he pulled to further pursue his relationship with Chloe. Melissa and Jeremy share a son together, Jeremy Meeks, Jr.