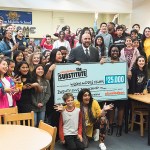 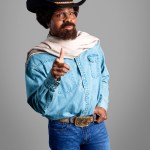 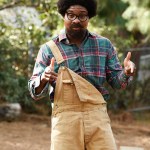 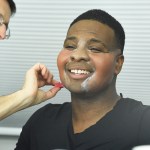 You’ve never seen Lilly Singh like this before. In this EXCLUSIVE video from the all-new episode of ‘The Substitute,’ Lilly transforms into an oddball substitute teacher and surprises a group of unsuspecting students.

Nickelodeon’s new hit series, The Substitute, returns with an all-new episode on May 18 featuring guest star Lilly Singh. In the episode, Lilly goes undercover at Woodrow Wilson Middle School in Glendale, Calif., to prank students in subjects including math, English, and natural history. Using a full costume and prosthetics to hide her identity, Lilly is transformed into a completely unrecognizable substitute teacher who is ready to push her students to their limits with her bizarre behavior. During the reveal at the end of the show, a $25,000 donation is made to the school.

Lilly goes all-out for The Substitute and we love her for it. When she arrives in the classroom as the substitute teacher, the kids can’t stop laughing over the way she’s acting. She smells something funky and begins going around to students smelling them. She also can’t stop sneezing! Lilly acts like her allergies are bothering her so she takes off her shoes in hopes of relieving the itching. She’s brought along foot spray and has one student spray her feet with the spray.

What else does she have in store for these kids?! Time will tell! The new episode of The Substitute featuring Lilly will air May 18 at 8 p.m. on Nickelodeon.

Lilly is an actress, producer, best-selling author, entrepreneur, and creator. She is the host of the upcoming NBC late-night talk show A Little Late with Lilly Singh. She is also a UNICEF Goodwill Ambassador and advocates for children’s rights. Her YouTube channel “iiSuperwomanii” has a reach of over 14 million subscribers to date.