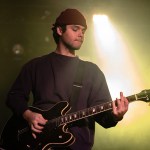 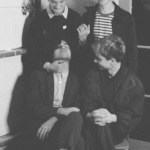 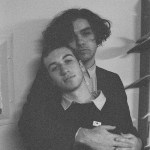 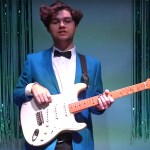 The rocker admits that with his band name changing from Mt. Eddy to Ultra Q, a new chapter arrives.

It’s no surprise that Jakob Danger has the musical chops to go the long haul. The 20-year-old son of Green Day’s Billie Joe Armstrong and brother to SWMRS’ Joey Armstrong, was born into a musical family, and has immersed himself in the art since childhood. However — while it would be easy for the singer to bask in the clout of his famous family, it’s clear that Jakob actually aims to do the exact opposite. The singer is striking out to build his own name for himself, and he’s off to a damn good start. His music proved hard to ignore when he first formed Mt. Eddy, and in 2019, he’s ready to command with a new project, Ultra Q. As fans get familiar with the new band name (and a new sound,) the rocker told us why this year is such a pivotal point in his career progression.

“We started that band when we were 17 years old, Jakob bluntly says when asked about the name change. “I was like 16 or 17, and then, the rest of the members were even younger than that. So I think, now, I’m not saying we’re much older, but we definitely have gotten different music tastes for sure,” he explains.

So, as the band debuts their first single as Ultra Q, entitled “Redwood,” he’s sure to define the differences between the old and the new. “I’d say we wrote the song…we wrote this song about a year ago, or I started to write it at least. It wasn’t really finished until recently, but, I wrote this song while Mt. Eddy was still around and it was definitely like the first kind of inkling where ‘[we were] like, ‘Oh, we want to do something different.’ This song is definitely a bridge between our old music and what we’re going to be creating,” he tells HollywoodLife.

He continues, “this song was actually sort of about nostalgia. It definitely relates to when I first came home after a while and talking about all these old obsessions I used to have when I was a kid. And yeah, this first song is for sure definitely a good bridge, I feel like, between our old songs and these new ones that we’ve been working on.”

Oh, and for fans that are wondering: why the name Ultra Q? Well — the singer revealed the inspiration behind the kitschy name. Basically, when I I dropped out of school and I came home, I was home for the first time in a long time and I was super nostalgic about my childhood things that I loved. And one thing I loved when I was a kid was the show called Ultraman. They had movies too, and they had like action figures and stuff. It was called Ultraman and I was super into it,” he shares. “I found out that there was like a prequel series called Ultra Q, and Enzo, who plays guitar in my band, is also super into that kind of stuff, so we were kind of nerding out on it together. And then someone was like, ‘Hey, we should just name our band Ultra Q in kind of like an homage to something we used to love when we were kids,’ and still do.

It goes without saying that at 20-years-old, Jakob is just getting started. “We’re working really hard on recording and writing more music and we’re going to be touring a lot. There’s going to be a summer tour and there’s going to be a lot more tours to come. We just want to play shows!” For now — be sure to catch Ultra Q’s latest single, above.