If you haven’t seen Avengers: Endgame yet, but you’re a huge fan of Agents of S.H.I.E.LD, which returns to ABC for it’s landmark sixth season on May 10, we have good news for you. Turns out, the events of the last MCU movie will play no part in the start of things on the show. While previous seasons have very pointedly dealt with the events of Marvel movies in the storyline, creators Jed Whedon and Jeff Loeb explained in a press event prior to the premiere that they actually opted out of addressing the events of the last MCU movies right out of the gate.

“Part of it had to do with the question of when we’d air, truthfully,” Jed explained to reporters. “We had talked about summer, but there was always a chance that we’d get moved up to the beginning of the year. With the amount of characters and money and machine in place with Endgame, we had to dodge it completely. Imagine if we had incorporated it, and then, at the last minute, the network was like, ‘You know what? We’d love to have this on in January.’ And then, all of a sudden, we’d spoil something. So, we made the decision to just be pre-snap, tell our story, and carry it forward. Hopefully, it will be satisfying and, in no way, a thing that bothers [viewers] about the show. We have our logic, but we don’t spend any time explaining it because we just wanted people to enjoy our story.”

As the story doesn’t follow the most recent MCU timeline, it instead picks up some time after the ending of Season 5, which at the time was thought to be the show’s last season. However, the show was ultimately renewed for two more season, 6 & 7, which meant the creators were given a rare opportunity to pick the story back up, with just a touch of a restart. However, though the show doesn’t touch on the events of the last two Avengers film, that doesn’t keep the team from being spoiled from events. “We have a couple people on staff that are super fans,” Jeff added. “And we have to talk to them about [movie spoilers] and they are like, (defeated) ‘OK,’ because it makes the movies less rewarding… But with all the franchises and movies, to try to exist in that all, is just the nature of the beast.”

Speaking of existing in the MCU universe, with Phil Coulson (Clark Gregg) officially gone, the last canon connection to the Marvel universe lies squarely with Chloe Bennet‘s character Daisy Johnson, also known as Quake. In the comics, Quake works alongside Captain America, Black Widow, and many other superheroes in the Avengers gang. With the MCU going into a new era, we chatted with Chloe EXCLUSIVELY, to see if she dreams of taking her incarnation of the character to the big screen, either to work alongside Captain Marvel or battle it up in Wakanda. 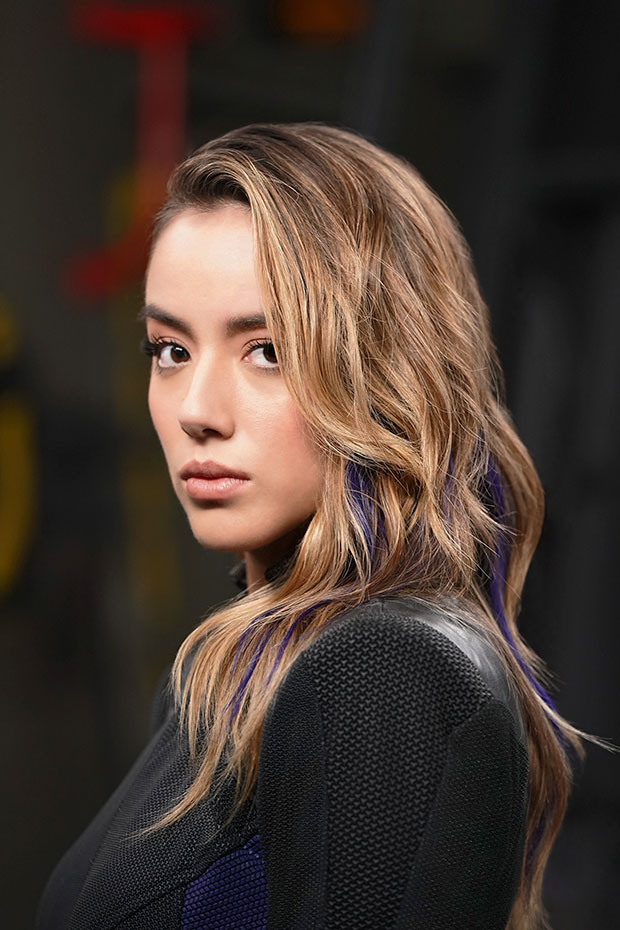 “Both those options would be so sick!” Chloe exclaimed. “I am going to say where I want Chloe to go! (laughs) Wakanda would be sick! It looks like so much fun there. But Captain Marvel was so great too! I mean, I would say the cinematic universes would be cool, but I am happy with our team here.” That’s great to hear, though admittedly, the team is a bit shattered following the death of S.H.I.E.L.D. leader Coulson, something that Chloe found interesting in exploring in season six.

“We really had a big conversation before this season,” Chloe added, “because she deals with so much loss. Her identity has been through Coulson and finding her parents or finding other people. So, I wanted the mourning of Coulson to be obvious and a huge impact, but also realizing loss happens in life, and that sucks, but [Daisy’s] going to do what he would want for [her]. She should move on and find love and be with people she cares about. That was important for me to capture throughout the season. Realizing the pain, but living herself and being herself. But now there is a guy that looks just like him, so that sucks.”

By that, she means that though Phil Coulson is dead, Clark Gregg will return to the show in a brand new, unexpected role. “I am Sarge,” Clark explained EXCLUSIVELY to HollywoodLife.com at the same press event. “Mack and his team are dealing with the loss of Coulson and are moving on. Things don’t stay quiet for long. There are anomalies, where beings are being bled into our space and they seem to have only destruction on their mind. They don’t seem to care about the cost that will play on humans. Then their leader shows up — and its a very familiar face.” His face, in fact, which should prove to be quite a shock for Team S.H.I.E.L.D.