George Clooney, 57, who’s known for his playful pranks within his star-studded inner circle, admitted that he has two little pranksters of his own in twins, Ella and Alexander. “They’re happy kids. They laugh a lot. They do pranks already,” he proudly told TODAY‘s Savannah Guthrie in an interview that aired May 7. George stopped by the morning show to promote his new Hulu series, Catch-22. “They put, like, peanut butter on their shoes, so that it looks like poo-poo on their shoes and stuff,” he shared of the twins, laughing. “They think that’s funny.”

The actor explained that although Ella and Alexander will turn 2 next month, “they’re not [in the] terrible twos” stage. In fact, he gushed over how funny the twins are, adding that their personalities are polar opposites. “They really come out with the personalities that they’re born with. My daughter will be like, ‘Sit down!’ and [Alexander] will sit down,” he explained, laughing. “They’re just completely different personalities and they’re fun and smart. They already can … do all their ABCs in Italian and in English, and I can’t do that — in English!”

The actor and wife Amal Clooney, 41, an international human rights lawyer, wed in 2014. They welcomed the twins on June 6, 2017. George, who was known as one of Hollywood’s most eligible bachelor’s, went on to praise his wife. “She’s taking ISIS to court for the first time anybody’s taking ISIS to court,” he said. “She’s working on trying to get the Reuters journalists out of Myanmar.”

“They do pranks already.” George Clooney tells @savannahguthrie about his twins pic.twitter.com/fSMNxBfOJt 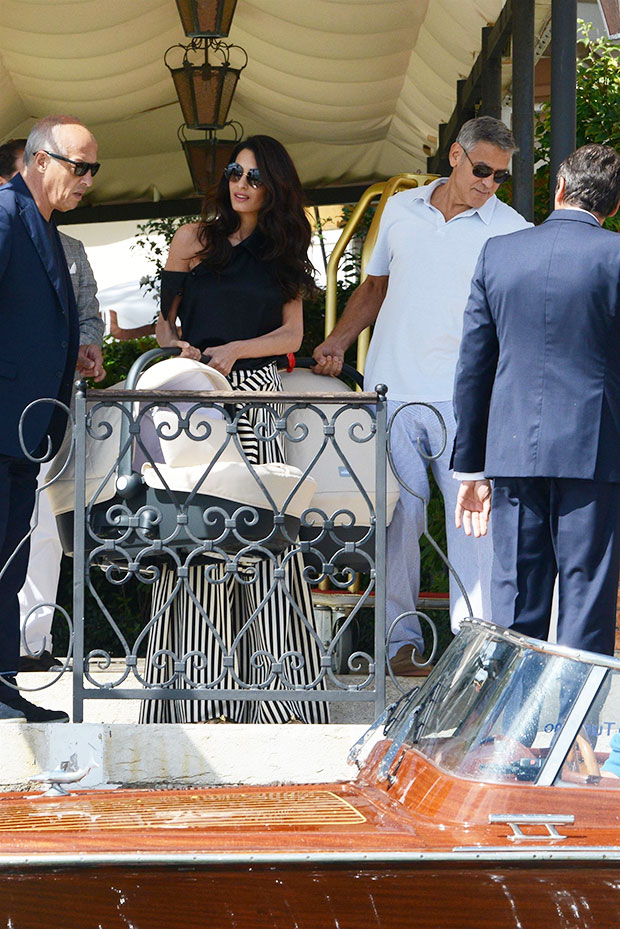 George and Amal Clooney out with twins, Ella and Alexander. (Photo credit: BACKGRID)

George continued: “She’s doing all that, and she’s also an incredible mom, like, an incredible mom — and a pretty great wife too,” the two-time Oscar winner said of Amal, adding, “So, I feel like I hit the jackpot.” Yes, Georg, you both did!

Related: George Clooney’s Kids: Everything To Know About His Adorable Twins, Alexander & Ella