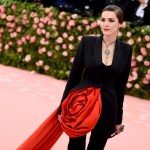 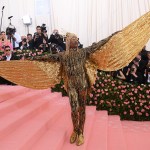 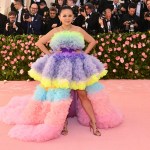 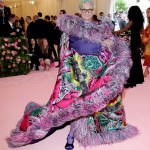 Chrissy Teigen sat out last year’s Met Gala since she was preparing to give birth to her son. But this year, the social media queen used her repeated absence to make an excellent meme.

“I have arrived” — that’s what Chrissy Teigen, 33, announced on May 6. But instead of stepping out on the 2019 Met Gala’s pink carpet, the model cropped her face on Tom Hank’s, who was clad in a Khaki Scout uniform a la Moonrise Kingdom (think — the indie version of a Boy Scout). Chrissy was poking fun at this year’s theme for the Met Gala, which was “Camp: Notes on Fashion.” Of course, “Camp” doesn’t actually mean ranger outfits designed for scouting bear tracks and roasting marshmallows — at least by Susan Montag’s definition.

We repeat, this year’s theme isn’t a reference to your summers in the woods, but actually refers to Susan’s 1964 essay, Notes on “Camp,” which begins by defining the term as “its love of the unnatural, of artifice and exaggeration.” With Camp, it’s not about talking in “terms of beauty” but rather “in terms of the degree of artifice, of stylization.” Celebrities answered that call in gold wings spanning more than a few feet (Billy Porter), a wearable candle chandelier (Katy Perry) and a faux severed head (Jared Leto), as just a few examples.

Chrissy wasn’t always laughing from the comfort of her home, however. The cookbook author first made her Met Gala debut in 2011 with her then-boyfriend (and now husband) John Legend. The top model returned three years later in 2014, rocking a gorgeous one-of-a-kind crystal encrusted silver Ralph Lauren gown! She wore another stunning gown by St. John in 2015, then after taking a year off, she and John returned with a statement in 2017! That year, Chrissy opted for a sheer and embellished Marchesa gown that marked her epic return to the Met Gala.

In 2018, the model was just a month away from her due date and over eight months pregnant. She told fans it was “too risky” to travel to NYC from LA for the event, so she had to sit out that year. And here we are, with another absence but one incredible meme — perhaps that’s the true spirit of “Camp.”