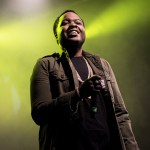 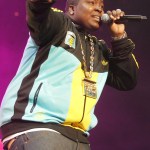 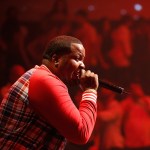 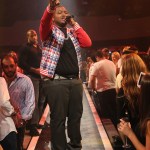 The singer teamed up with rapper Tory Lanez and Davido for the brand new track, and everyone’s taking notice of the song — including longtime friend and collaborator, Justin Bieber!

There was a time when one couldn’t leave the house without hearing a snippet of Sean Kingston’s music, but the “Beautiful Girls” crooner has been noticeably absent from the scene in recent years. Now — the American-Jamaican singer is ready to make a return to music, and he told HollywoodLife about the first song off his forthcoming record, and the pivotal transformation he underwent after the near death experience that landed him out of commission.

Day one fans of the singer will be happy to hear that Sean’s latest track, which dropped on April 26, is chock full of his signature rhythmic sounds. “Peace Of Mind,” is a danceable track created with Canadian rapper Tory Lanez and singer-songwriter Davido. The collaboration with Lanez is no coincidence, Kingston says. “He was friends with my record label. Yeah, he was friends with my record label. A lot of people don’t know that. I discovered Tory Lanez. Basically, I felt like we were really good. I mean, we connected. He’s very successful right now. I’ve been a fan of his sound. I’ve been a fan of his sound. That’s the reason why I signed him. I feel its only right that we linked up. We never really had a record together in the mainstream world, so it was only right.”

The infectious track is all about a romance that vacillates between peace and endless quarreling. “I basically asked my woman, ‘Tell my why do you argue so much? I could never get a peace of mind when I’m with you but I don’t wanna be away from you.’ You know what I mean? It’s that concept, you’re just like, ‘She’s my kryptonite.’ Basically, she’s my drug. I can’t get away from her no matter how much we argue and fight, we don’t get along. I was in a two year relationship, and we fought a lot. But, one thing I could say, she’s my greatest teacher. because she taught me a lot of stuff,” he tells HollywoodLife of the song’s meaning.

After experiencing the scare of a lifetime in 2011, where he nearly lost his life in a jet-ski accident, Sean approaches making music a little bit differently these days. “I just want to be …being away after the accident, and slowing down for a little bit, it made me open my eyes. I think I needed that to let me get humbled and to see who’s really with me. I had to weed out all the people that wasn’t really meant to be around me. A lot of people don’t know they got a particular energy. Your energy is everything. If you don’t protect that energy…you’ve got nothing.”

Sean has a full EP on the way, which he can’t wait to share with fans. The entirety of the album was recorded in Jamaica, says the singer. “It was just a concept that I wanted to play off of and, yeah, I feel like anything on this Made in Jamaica project is, every concept, is just about how I’m really feeling at the moment. What I really went through right there, you know?”

What’s most impressive about the singer’s return is his unwavering positivity. “A lot of people commit suicide if they’re going through a difficult time. It gets tough, and I get it, but you have to be able to overcome it and say “You know what? There’s a devil, but there’s also a God and my God is stronger, and I’ll be able to come back. Regardless of what anybody say, or anything, that’s what I do.”

Be sure to take a listen to Sean’s new song with Tory and Davido above! With one listen, you’ll understand why everyone, including Justin Bieber, is bumping the track today.