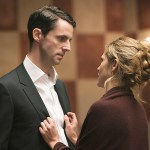 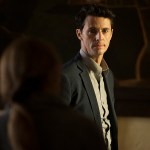 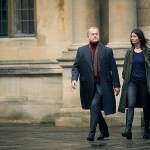 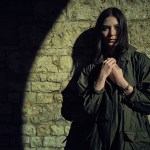 Matthew and Diana’s connection continues to get more and more intense. The two share a dance that quickly takes a turn in this EXCLUSIVE preview of the all-new episode of ‘A Discovery of Witches.’

There’s no doubt about it: Matthew (Matthew Goode) and Diana (Teresa Palmer) have insane chemistry. The two share a dance in this EXCLUSIVE preview of the April 28 episode of A Discovery of Witches. Diana is a little uneasy on her feet, but Matthew leads the way. Diana soon becomes entranced by Matthew and gets the hang of the ballroom quickly. Suddenly, Diana begins to glow — literally. Matthew looks at Diana in awe. “Extraordinary,” he says.

The synopsis for the April 28 episode reads: “Matthew’s hope of keeping Diana safe is short-lived as Ysabeau refuses to welcome the warmblood. Knox calls an emergency meeting of the Congregation to denounce Matthew but Matthew’s ferocious brother Baldwin plays a careful game to maintain control.” This will be the show’s fourth episode of season one. A Discovery of Witches made its network television debut on AMC and BBC America following a successful premiere on the AMC Networks’ streaming services Sundance Now and Shudder.

A Discovery of Witches is based on the bestselling and critically-acclaimed novel of the same name by Deborah Harkness. It’s an enchanting modern-day love story set against the backdrop of Oxford academic life. Historian Diana Bishop, a reluctant witch denying her heritage, accidentally discovers a long-lost bewitched manuscript in Oxford’s Bodleian Library and is immediately thrown into the heart of a dangerous underworld. On her journey, she finds herself tossed into the path of enigmatic vampire and geneticist, Matthew Clairmont, who hides a dark family secret. The show airs Sundays at 9 p.m. on AMC and BBC America.