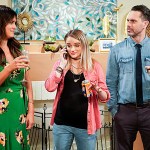 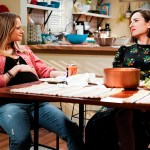 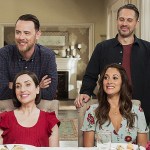 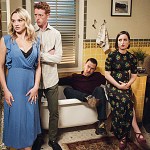 Matt and Greg find themselves in quite the predicament. They both find out they’ve picked the same baby name in this EXCLUSIVE preview of the all-new episode of ‘Life In Pieces.’

Matt and Greg are just having a friendly chat about baby names until things take a turn. “You do not want to let anyone know the name you’ve chosen until the baby is born. They’ll crap all over it,” Greg says in our EXCLUSIVE preview of the new Life In Pieces episode. Matt replies, “I’m not even worried about it. You can’t ruin a good name like Alex.”

The look of shock on Greg’s face is priceless. Matt and Greg have both chosen the same baby name. When Greg says he and Jen are going to tell the family first, Matt nips that in the bud. He pushes Greg onto the couch and races to the dining room to tell the family that he and Colleen will be naming their baby Alex.

Greg comes in just a little too late and yells “Alex!” Jen is furious. She pulls Greg aside and demands, “I just need you to go get the name back… I’m going to cut to the chase, Greg. You’ve lived in your brother’s shadow for a long time.” Greg notes that he’s 5 inches taller than Matt. Jen claps back, “And I’m going to need you to go out there and swing that 5 inches around, really show your brother who’s boss, Greg.” Jen’s not messing around.

The synopsis for the April 25 episode reads: “While Joan is bedridden recovering from surgery, she persuades Sophia to spend time with her, which she quickly regrets. Also, Jen and Greg select a name for their new baby only to learn that Matt and Colleen chose the same one. Colleen and Matt invite the family over to get to know Morgan (Joey King) and Heather has a new business idea.” Life In Pieces airs Thursdays at 9:30 p.m. on CBS.