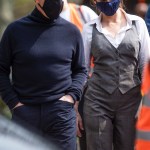 Though he hasn’t been seen with Suri Cruise for years, HollywoodLife.com has EXCLUSIVELY learned that Tom Cruise still ‘thinks about her all the time’ and has plans for her 13th birthday.

Suri Cruise celebrates her 13th birthday on April 18, 2019, but don’t expect her father, Tom Cruise, 56, to be there when she blows out the candles on her cake. The Mission: Impossible star hasn’t been seen with his daughter for years, ever since he and her mother, Katie Holmes, 40, split. Yet, while he’s not really involved in Suri’s life, that doesn’t mean he is going to completely ignore her special day. “Tom does plan to send Suri a gift and call her on her birthday,” a source close to Tom shares EXCLUSIVELY with HollywoodLife.com, which is similar to what Tom did last year.

Though Tom is practically a ghost in Suri’s life, that doesn’t mean he doesn’t care about her. “As challenging as things have become for him and his daughter,” the insider tells HollywoodLife.com, “he still loves her. [He] thinks about her all the time and will recognize that she is becoming a teenager and a young woman on her big day. Tom never intended to be estranged from his daughter when he decided to have a family with Katie and looks forward to repairing the relationship one day. But in the meantime, he knows the least he can do is reach out on her birthday.”

Though Suri has spent most of her life without a father – she and Tom were last seen together in public in 2013 – her mother has worked overtime to make sure that she had a life full of love and happiness. “[Katie] has done so well raising Suri,” a source close to the actress EXCLUSIVELY told HollywoodLife.com, “and is doing her very best to give her daughter a stable environment.” Suri, according to the insider, is Katie’s number one priority and she’s very “hands-on” when it comes to seeing that her daughter grows up “incredibly well-adjusted and happy.”

As to why Tom doesn’t see Suri, Rick Ross, a qualified expert on the Church of Scientology, EXCLUSIVELY told HollywoodLife.com that’s because of Suri’s proximity to her mother. Katie, according to Rick, has probably been designated as a “Suppressive Persons,” a classification within Scientology. Church followers are taught to avoid “SPs,” as they’re called, and “Potential Trouble Sources,” or people who hang out with SPs. “Tom Cruise would not want to come in contact with an SP. And if he views his daughter as a PTS, which is very likely, he would not be that excited about dealing with her either,” the expert added.