Halle Berry embarked on a sweet outing with her 5-year-old son Maceo on April 9, whom she shares with French actor, Oliver Martinez. While little Maceo is beginning to look like mom, he’s the spitting image of his father!

Halle Berry, 52, and her son Maceo, 5, appeared to be having the best time as they gallivanted around Los Angeles on April 9. The mother-son duo stepped out to grab an afternoon snack on the sunny day, and hit up Einstein Bros Bagels. The actress wore a flowing, white dress with flip flop sandals as she escorted her little one to the car afterwards. It was a rare sighting from the pair, as Halle usually aims to keep her kids out of the spotlight, far away from the lens of paparazzi.

Just like mom, little Maceo kept it casual for the lunch outing. He wore a simple pair of navy sweatpants, as well as a gray graphic t-shirt that read “Lions” across the front. He was sure to reach for mom’s hand as they walked down the LA sidewalk together, and the tyke is beginning to look more like Halle every day!

Halle shares her five-year-old son with her ex-husband, Oliver Martinez, whom she divorced in 2017 after three years of marriage. Maceo was their only child together. Halle is also mom to 10-year-old daughter Nahla Ariela from her previous relationship with model Gabriel Aubry. Thankfully, Halle has got co-parenting down to perfection. Between throwing joint birthday parties for her kids, or taking an amicable family stroll, Halle has made a point to put her kids first. However, as much as Maceo is starting to look like mom, he’s truly the spitting image of his father. The little one is undeniably the mini-me version of his dad. See the picture proof below! 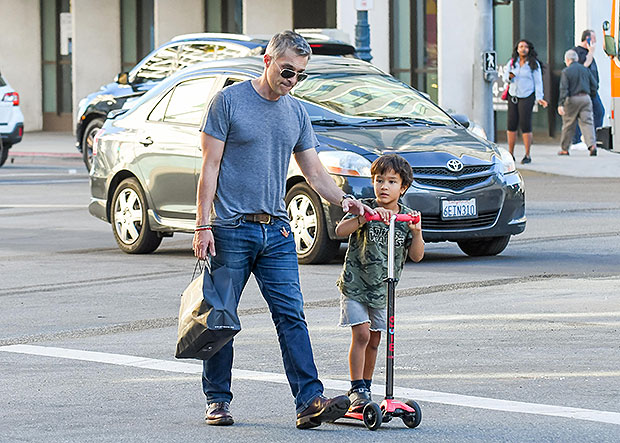 We’re loving these sweet snaps of Halle with her son, and rare ones at that! There’s no doubt about it: Maceo is beginning to look more like Halle’s twin every time we see him, but is still the spitting image of his actor father.