Since Dolores Catania joined The Real Housewives of New Jersey as a full time cast member (in season 7), her close relationship with her ex-husband, Frank Catania has intrigued viewers, to say the least. Although the co-parents have been divorced for nearly 20 years — after Frank’s infidelity when she was nine months pregnant — the exes left fans stunned when Frank moved back in with Dolores during the show’s eighth season. The move came after his 11-year relationship ended with then girlfriend, Ellie.

Soon after the exes reunited under one roof, fans and even former New Jersey housewife, Danielle Staub, 56, speculated that Dolores and Frank had rekindled their relationship. But, that was never the case — “even to this day,” Dolores, 48, who still shares a home with Frank, admitted on the HollywoodLife podcast, April 1. Either way, critics called Dolores a “fool,” for even allowing her ex-husband to return home, especially after their divorce didn’t end pretty. But, it’s been easy for the new Formaggio Cheese brand ambassador, because she realized that their divorce “saved” their relationship.

“Now, it works because my resentment got thrown in the garbage,” Dolores said before she admitted that she turned lemons into lemonade. “People used to say years ago, ‘You’re a fool. You go food shopping for him? Why are you doing this crap?’ It’s foolish pride,'” Dolores recalled. “But listen, I’ve got more bees with honey. Frank gave me more money. I didn’t do well in my divorce. I divorced an attorney… The nicer I was, the more I got,” she explained.

“‘So, who was the fool? Who was the fool?’ — That’s what I say. That doesn’t work for everyone, but fighting never works [for me]. It’s an anchor, and holding a grudge and resentment is an anchor,” Dolores continued, before she explained how Frank pulls double his weight in their home. “Frank’s not only paying the bills, Frank’s sweeping the floor. I don’t pay for a man to live with me. I’ve been single 20 years, I’ve never remarried. Frank’s always paying.”

Frank walked out on Dolores and her daughter, Gabrielle (now 23) who was three at the time, while the reality star was pregnant with their second child, a boy, Frankie, (now 20). After Frank’s infidelity, Dolores admitted that she “fell apart.” — “My mother thought I was going to die from a broken heart,” she added. 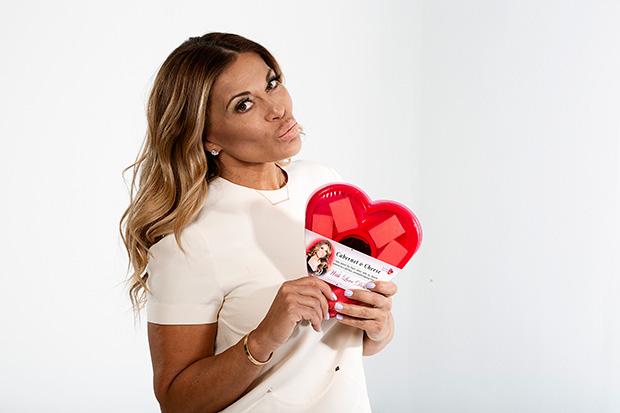 The RHONJ star visited HollywoodLife’s New York headquarters with her Formaggio Cheese family. Dolores is the brand’s newest ambassador, with her own line of cheese on the way — available this summer in local stores. “I have my own line. It’s called, ‘With Love, Dolores’,” the mother of two gushed. “It’s an aged sharp cheddar cheese with a wine jelly, and it’s so good. It’s low carb and it’s Keto-friendly. This is my go-to snack. It’s packaged in a heart with my face on it. So, my mom, she doesn’t throw the package away. She’s got 100 of them now, because it has my face on it!”

Dolores, who’s adopted a healthier lifestyle since struggling with an eating disorder, which was touched upon in season 9, wants people to know that Formaggio products truly do align with those who maintain active lifestyles. “I’m addicted to food. I love it,” she admitted. “But, I’ve learned what’s bad for you in certain foods, and now I’m really trying to help people know that there are options.” Dolores, a proud Italian uses Formaggio Cheese as her option to bread, which is her biggest guilty pleasure.