If your plans this weekend include seeing the new reboot film of Hellboy, it’s probably for one of two reasons: First, you’re a diehard David Habour fan and you’re desperately looking to fill the debilitating void in your heart caused by the absence of Jim Hopper from Strangers Things in your life for a year and a half. (Guilty!) Or two, you’re a lifelong, ride-or-die Hellboy fan. You’ve read all the comics, you’ve seen both of the Guillermo del Toro films, and now you need to see how this new incarnation lives up to your extremely high expectations. If it’s the latter, have no fear — David promises you won’t be disappointed. Speaking with the film’s title star at the NYC screening, I asked David what was the one thing he wanted true Hellboy fans to know about the movie.

“That’s a good question,” he said as we chatted outside the AMC Lincoln Square Theater ahead of the screening. “I think that we are going to the source material, and we’re going directly from the page of the Dark Horse comics. The color palette is a lot darker; it’s really more of a horror, almost heavy metal movie in a certain way.” Now, this should be a welcomed answer for all devotes to Hellboy creator Mike Mignola‘s creative vision. Though many are attached to del Toro and Ron Perlman‘s adaptations, this film is being touted as being more focused on the comics than ever before, sticking primarily to the story arch established in ‘The Wild Hunt’ comics.

As for David’s portrayal of Red, Harbour admits his version is one purists will recognize quickly. “Hellboy himself is a bit raggedy, scarred. He lives in a brutally violent world. He lives in a world where the Apocalypse is no joke, and monsters are eating things they shouldn’t be eating. I think that, in that way, it’s kind of dark, and I think that’s what Hellboy fans should know. There’s a violence and a brutality to the world [like in the comics].” 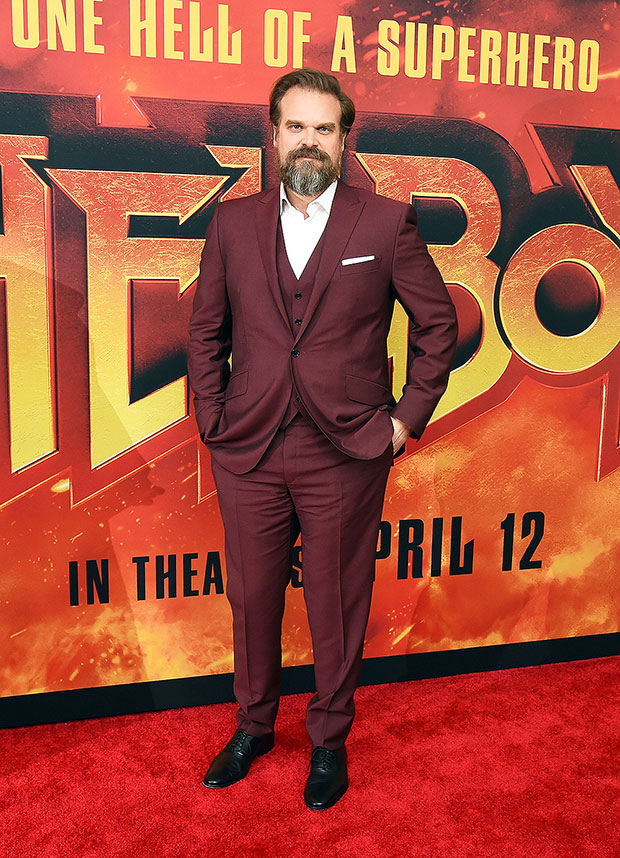 If gorey monsters isn’t really your thing though, fear not, because the Hellboy movie also has a ton of comedy to enjoy, as evident by the film’s first trailer (watch above). David stars alongside Ian McShane, Daniel Dae Kim, and Milla Jovovich, who plays the big, bad Nimue, the Queen of Blood, who is hellbent (pun intended) on destroying the world. You’ll have to see  Hellboy, which hits theaters on Apr. 12, to see if she succeeds.