The March 29 episode of The Blacklist, which airs Fridays on NBC, featured a heartbreaking ending. Aram thought he was going to leave his life with the task force behind for Samar, who was forced to go into hiding after being put on the Mossad’s hit list. At the moment he was supposed to meet Samar, Red showed up. Red helped Samar set up a new identity in an undisclosed location — without Aram. Aram was devastated and punched Red in the face. HollywoodLife got the EXCLUSIVE scoop from Amir Arison about the fallout of this.

“The last episode ended with Aram sort of losing his innocence and optimism. As hard as it’s been to keep throughout all the things that have been happening with Samar, and he’s also always kind of feared Red and looked up to Red to a certain extent, that’s all been shattered, so that was really exciting and nerve-wracking to play,” Amir told HollywoodLife EXCLUSIVELY during a sit-down interview. “I also wondered, how is this character going to continue? I was really concerned about that, too. I feel like a lot of the viewers are expressing that concern that I had when that episode ended, and then I got the script, and they knew exactly what to do. They knew exactly how to handle this, so Aram is still feeling the way he felt at the end of that episode, but has processed and is now making decisions in a way that we haven’t seen in him before. Certainly with the loss of innocence and certainly with an absolutely different attitude towards Reddington. So I get a lot of scenes with James [Spader] this episode. They’re different than anything we’ve seen before. I’ll just say this: the writers know what they’re doing, and they know how to satisfy this storyline in a way that feels organic, and they know how to come off of the last episode so that the character can still, at some point, remain at the core of who he is without changing the character.”

Aram punching Red was one of many shocking moments during the last episode. “I don’t think Aram planned that punch. I think it’s just something that happened in the moment,” Amir said. “You could feel that he’s grasping on every shred of hope that there is, and it’s gone, and he knows it’s gone. He knows Samar, and he knows Reddington, and he knows the situation. He knows that there’s no moves or hope left to go, and when she hangs up, I think he’s absolutely lost, and then Reddington says, ‘I’m sorry, Aram.’ Then that brings him right back to Red.”

The episode bid adieu to Mozhan Marnò, who had played Samar since season 2. “I always felt like Mozhan and I had a really great chemistry, and so I am, as an actor, saying goodbye to my number one scene partner,” Amir continued. “She’s been a focal point of Aram’s life and you’ll see that it’s still a focal point for this next episode in a major way. Even though she’s not present physically, she’s so present in the episode. My mom told me something once when her mother passed away. She said she couldn’t imagine living. She was so close to her mom, and my mom was 20 when she lost her mother. She said, ‘The thing I learned is that I didn’t die from the grief.’ So, I think Aram is living. He’s continuing to live — so what becomes his purpose? I think that’s a big question for the next episode. She’ll always be a presence in his life. Forever.” As for whether or not we’ll ever see Samar again, Amir said, “I don’t know. I hope so.”

While Aram is angry with Red, Amir added: “Aram is not a vengeful person. He’s not interested in revenge. He’s a guy who needs to do whatever he can to do in a weird way to remain optimistic, even though he’s lost his optimism. It’s almost like Reddington. He’s almost like absorbed a piece of this fearless danger. The thing I was most concerned with was how do I continue this character on this series? Everyone’s like, oh no, Aram’s breaking bad. He is, but he is who he is. You can’t fully change your character, and you’ll see at the end of this next episode how they handle it, and how it moves forward going forward. 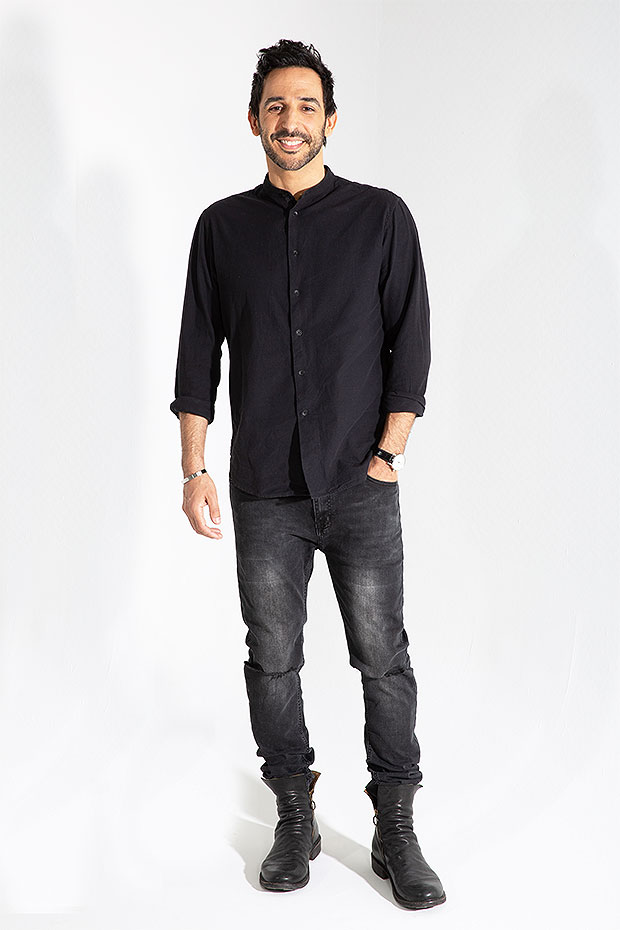 Amir is also directing a behind-the-scenes documentary titled Tati, following 8-year-old Tatianna Bernard on her journey as she creates her own Angelight short film while undergoing treatment for a medulloblastoma brain tumor. Amir explained what it’s been like working on this project. “I’m still working with her,” he said. “We’re about six and a half months into filming the doc. We probably have a few more months of filming to go. It’s changed my life. The Blacklist has probably been the most exciting acting gig of my life, but this is rewarding on a whole different level. It requires a certain care, sensitivity, responsibility, obligation, commitment to this family. This family has let me into such personal things in their lives. The mom has revealed to me things on camera that she’s never told anyone.”

He recently guest-starred on the season premiere of Billions and guest stars in the upcoming series Ramy, which will drop April 19 on Hulu. For Amir, getting the chance to play different characters has been a great opportunity. “It’s very hard with this schedule to be able to get an opportunity to guest on other shows. I’m a big fan of Billions, so to get to act on that show opposite Damian Lewis, David Costabile, Terry Kinney, Asia Kate Dillon, and that the role is literally the anti-Aram. I mean, that guy is manipulative and dark and confident. Just a whole different dimension. I’ve played roles similar to that, but it’s been a while, and to just be able to flex that muscle. I’m an actor, so it feels great. And then I have Ramy coming up. He’s a good friend of mind. His name is Ramy Youssef, and he’s got this Hulu series all about his life, and he actually cast me in the pilot as a really fun guest star, but it didn’t work out with The Blacklist schedule. And then he called me five episodes later. He’s like, ‘Could you do this part?’ And Blacklist schedule didn’t work out. Then he called me. He goes, ‘I don’t know. This part’s not exactly right, but I really want to get you in there. We’re on the ninth episode of 10.’ And it was a small part. I’m playing a deli guy. Man, it was fun to just do an all-out comedy.”