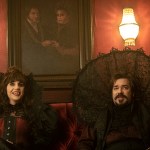 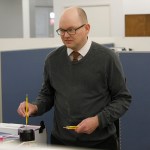 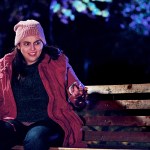 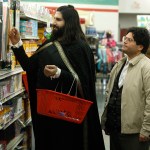 Jake McDorman made quite an entrance in the ‘What We Do In The Shadows’ premiere. HL spoke EXCLUSIVELY with Jake about that jaw-dropping scene and working with Jemaine Clement and Taika Waititi.

If you haven’t seen the What We Do In The Shadows premiere, then what are you doing?! The March 27 premiere was hilarious from start to finish. Jemaine Clement and Taika Waititi have adapted their hit 2014 comedy for television, this time with a new story and new characters. Jake McDorman stars as Jeff, an average human guy who Nadja thinks is the reincarnation of her old lover, Gregor. Nadja spies on Jeff and catches him masturbating in one of the funniest scenes from the premiere. That scene was actually the first scene Jake filmed for the show, and his recollection about it is absolutely hilarious.

“They sprung that on me like the day I had to do it,” Jake told HollywoodLife EXCLUSIVELY. “That was my first day at work, by the way, with my heroes, Jemaine and Taika. I went to set at midnight, because the show is all about vampires, so it’s night shoots. I meet Taika and Jemaine, and the first scene I’m doing is that scene. The first experience I had on What We Do In The Shadows was laying in bed with a walkie talkie next to me with Taika Waititi giving me direction on my ‘O’ face. He’s like, ‘That’s good. More teeth. More teeth. Now be happy about it. Be happy about it. Now angry. More angry at yourself. Hate yourself a little bit. Good, good. Hate yourself. Hate yourself.’ I’m just going to town trying to take his direction, and he goes on and on and on until I finally broke. I was like, ‘Oh my god. Someone call cut.’ He goes, ‘Oh, mate. We called cut ages ago.’ I asked Jemaine, ‘So was that everything that you’d imagined when you wrote it?’ He’s like, ‘Yeah, pretty much.’ As much as I would’ve died if I got a call from them personally about getting the part, I think this introduction was even more special.”

While Jake couldn’t reveal whether or not Jeff is actually the reincarnation of Gregor, he teased that “Nadja is dead certain, so that will play out for sure, and we’ll find out if that’s real or if she’s mistaken.” Even though Nadja is a vampire, Jeff is just excited to have some female attention. “He’s just so stoked to have someone even into him that he doesn’t stop to ask why,” Jake continues. “He’s just going to roll with it. You want to look like a vampire from hundreds of years ago? That’s all right. I’ll take it. It’s the most innocent intentions.”

Before What We Do In The Shadows, Jake was working on the Murphy Brown revival, playing Candice Bergen’s onscreen son, Avery. These projects were polar opposites. Once he was finished filming Murphy Brown, Jake jumped at the chance to be a part of Jemaine and Taika’s show.

“I’ve seen almost everything both of them have done, and that was how I went into this project, and that’s always an exciting way to go into anything,” Jake said. “It was also humbling and terrifying. But they did such a good job of making you feel like, hey, you’re here for a reason, and we’re going to have some fun, and just have a blast. There was no pretension. There was no ownership. It was really, really, really a great environment to improvise, play around, take suggestions, and get ridiculous.” What We Do In The Shadows airs Wednesdays at 10 p.m. on FX.