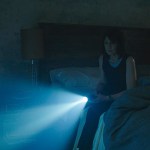 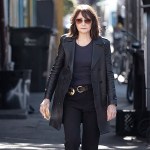 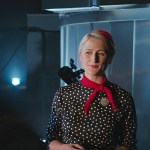 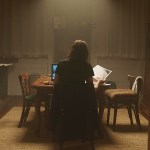 In ‘Out Of Blue,’ the investigation into the suspicious death of a beautiful young astrophysicist sends a dogged New Orleans detective (Patricia Clarkson) on a journey that brings on strange visions. Will the mysteries be solved?

When a stunning blonde black hole expert is found shot to death in an observatory, veteran New Orleans detective Mike Hoolihan (Patricia Clarkson) needs to utilize all of her skills to deduce the identity of the killer — all while trying to keep a grip on her understanding of reality. At the start of this EXCLUSIVE clip of IFC’s Out Of Blue, Hoolihan and fellow cop Tony Silvero (Aaron Tveit) unseal a labeled cassette of legendary blonde singer Brenda Lee, which they found in the car belonging to the dead victim, Jennifer Rockwell (played by Mamie Gummer).

After placing it in a tape deck, it’s not Brenda Lee that we hear singing, but Billie Holiday, delivering her song, “I’ll Be Seeing You,” and then, shockingly,  Jennifer Rockwell’s voice cuts into the song. “This is the only thing that seems right. I’d like my ashes put in the trash, and I – I am sorry. But, hey. It’s all relative,” instructs Rockwell. Suddenly, the brilliant young woman’s death is even more stunning. The seemingly happy and accomplished daughter of wealthy industrialist Col. Tom Rockwell (James Caan) hasn’t been murdered – she’s committed suicide.

While Tony is ready to put this ‘suicide’ behind him — “Case closed,” he says – Hoolihan discovers a piece of paper within the cassette tape that indicates this mystery is far from over. What she doesn’t know is she’s about to fall “down the rabbit hole of the disturbing, labyrinthine case,” according to IFC Films. Detective Hoolihan will grapple with “increasingly existential questions of quantum mechanics, parallel universes, and exploding stars—cosmic secrets that may hold the key to unraveling the crime while throwing into doubt her very understanding of reality.”

“I am most fascinated when I watch a film noir by the characters and their often hidden motivations,” said director Carol Morley (Dreams of a Life, The Falling). “I wanted to explore the idea that we all wear masks, that a person is not necessarily who they seem to be. All of my characters in Out of Blue are wearing a mask in one way or another, hidden from view in plain sight. Even the city of New Orleans, with its magical thinking, voodoo, and the beads and masks of Mardi Gras, is disguised through windows and oblique views.”

This noir is loosely based on Martin Amis’s 1997 novel Night Train, and Morley said she was inspired to adapt it “because of the central woman detective and the cosmological theme. Suicide runs through the book, and my own father’s suicide when I was eleven-years-old has been the ultimate mystery, something that demands a lifetime of probing. I felt that I had something to say about suicide, something I wanted to seed into the film.”

She also explains that the film’s title came about when she realized she “departed so radically” from the source material. “I came up with Out of Blue because it seemed to encapsulate what so much of the film was about – the blue of the night planet, the blue of the police, the blue of human emotion and the thin blue line of our atmosphere.”

To find out where Out of Blue is currently playing, go to IFCFilms.com.