Hustlers is here! … Well, the first photos from the movie set are here. Constance Wu, 37, was photographed in character on set of the stripper drama in New York on March 22 — the first report day of filming. The Crazy Rich Asians actress looked nothing like her breakout role, Rachel Chu — but, she looked pretty damn good in her new, sultry threads.

Wu was spotted wearing ripped leather pants, a two-tone zip-up jacket, and sky-high, blood orange ankle booties. She also rocked a cool brown jacket with fur. Wu looked stunning with dark straight hair that went down to her shoulders with edgy bangs, as she carried a thick binder in her left hand. The actress was seen walking near a trailer on set, with a crew member shielding her from the New York rain with an umbrella

Hustlers, which is set in New York City during the 2000s financial crisis, follows a crew of savvy former strip club employees who band together to scam their Wall Street clients. The Hustlers cast includes other big names, Jennifer Lopez, Riverdale star Lili Reinhart, Keke Palmer and Julie Stiles. Rapper Cardi B, — a former Bronx stripper, who’s been vocal about her stripping days — will make her big screen debut when Hustlers hits theaters (a date has not yet been set). The film, directed by Lorene Scafaria and produced by STXfilms, is based on the 2015 New York Magazine The Hustlers At Scores, written by Jessica Pressler. 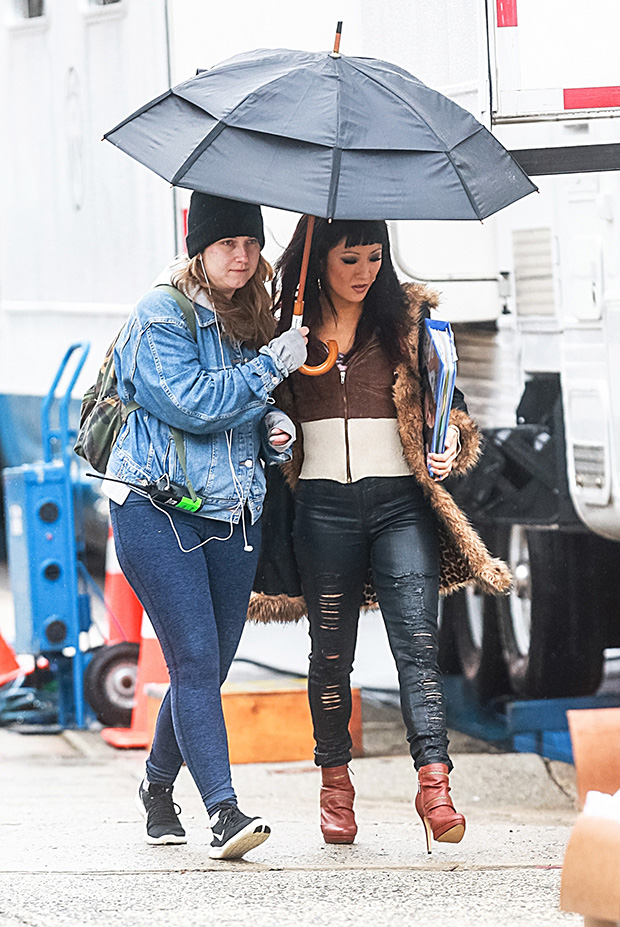 Constance Wu is photographed in character on the set of ‘Hustlers’ on March 22, 2019. (Photo credit: Backgrid)

While there’s not too much information about the forthcoming film, Cardi has given the public insight into her days as a stripper. The “Money” rapper has even credited stripping with helping her to stay afloat financially and helping her to become as strong as she is today.

“A lot of women here, they taught me to be more powerful,” Cardi told CBS Sunday Morning’s Maurice DuBois in December 2018 during a profile in which they visited Brooklyn’s Lust club where she once worked. “I did gain, like, a passion and love [for] performing,” Cardi said. “It made me feel pretty… I’m glad for this chapter in my life. A lot of people always want to make fun of me — ‘Oh, you used to be a stripper!’ — I don’t ever regret it, because I learned a lot. I feel like it matured me. My biggest ambition was money. That’s what these women put in my head: nothing is important but the money.”