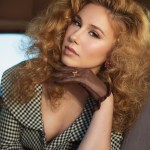 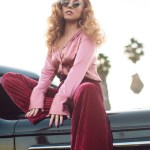 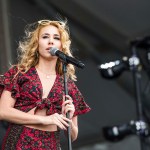 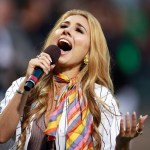 Haley Reinhart’s talent was first recognized on ‘American Idol’ & she’s since become a viral sensation. With her latest, ‘Honey, There’s The Door,’ the singer instantly captivates & she EXCLUSIVELY told us all about the song’s deeper meaning.

American Idol alum Haley Reinhart, 28, is readying the release of her next studio album, Lo-Fi Soul, and if the record is anything like her newest single, “Honey There’s The Door,” fans are in for a treat. The dreamy new track from the soulful songstress will transport you to another time, and the singer elicits some major Marilyn Monroe vibes with this one. Her soft vocals float effortlessly through the ballad and Haley told HollywoodLife that’s exactly what she was aiming for with her new music.  “It’s very ambient,” and will “take you to another place,” Haley told us of her record set to arrive on March 27.

The music video for the track features Dancing with The Stars’ Julz Tocker, and of course, his dazzling dance moves. While fans may be familiar with Haley from her popular cover tracks, most notably her rendition of Elvis’ “Can’t Help Falling In Love,” which was streamed over 500 million times, the singer’s latest release is comprised of all original tracks. Haley is truly the star of the show this time around, and she EXCLUSIVELY told HollywoodLife where her fountain of inspiration came from.

Congrats on “Honey, There’s The Door.” What was your inspiration for that song and video?

With this whole record, I really wanted to give people a bit more of who I am and my personality and just all of the different flavors that I have going on. But, this one was super fun to make. I think that I have little hints of my jazz influence that comes through, and also R&B with the drum loop and different things.

The storyline is really just a playful, cheeky spin off of a relationship where I’m just like, ‘I love you. Everything’s super great. I’m not breaking up with you, but you better treat me with the utmost respect and treat me like a queen,’ basically, ‘Or you’re out the door.’ So, it’s kind of comical, in a way, and also just a story of a confident woman who knows her self worth.

It sounds like it’s a feminist anthem in a way.

Totally. I kind of always get a lot of messages towards the women audience, and younger women of this generation. It’s always been really important to me and so I’m kind of keeping that thread going.

The new “Lo-Fi Soul” video has a bit of a vintage feel. Why did you want to give it that treatment?

Oh, man. I’m so really happy that it spoke to people, because I just wanted to do something myself and make my first video and make it a like a home video of moments that changed my life on a daily basis. You know, everybody always sees the more glamorous moments and when you have milestones in your career those go up online. I wanted to paint this picture, the realest picture I could.

How would you describe the overall vibe of the full album?

It’s kind of a combination of my favorite genres, and I sing all of them, so between soulful pop and rock & roll and jazz, and there’s just this feeling of a lot of dream-like feelings I wanted to portray. So, it’s very ambient and I wanted it to take you to another place.

You’re a bit of a cover queen, too. Is there a song you haven’t covered yet that you’ve always wanted to?

Well, I’m proud to say that this album doesn’t have any covers which is cool. But, I do love covering stuff. The first song that came to my mind was “Sex and Candy” from Marcy Playground. I love that tune.

Anything else on the docket for 2019 fans should know about?

My next tour is kicking off April 2nd! They can look forward to the album coming out before then. I’m looking to do a whole lot the rest of this year.

Haley’s new record is set to arrive on March 27.