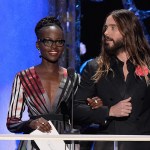 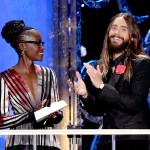 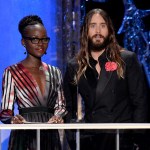 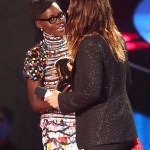 Lupita Nyong’o still has Jared Leto ‘on speed dial’ five years after sparking romance rumors during the 2014 award season. But she gave us insight behind all that buzz.

There was once much speculation that Lupita Nyong’o, 36, and Jared Leto, 47, were a couple, as they were often seen by one another’s sides during the event circuit for the 2014 award season! With even more big budget movies on her track record now (Black Panther, Us), Lupita admitted she’s still close with her award show buddy and, yes, finally spoke on all those dating rumors. “Jared Leto, he’s still on speed dial, because we were on that [Oscar campaign] journey together and he’s so embracing of me,” Lupita told Net-a-Porter’s digital magazine, PorterEdit, in an interview published on March 8. And the chemistry we saw was real, although fans may have interpreted it wrong.

“There was an intimacy that grew from that, that goes beyond the dating rumors, beyond all that,” Lupita mused to the magazine. Consider her and Jared as the Lady Gaga and Bradley Cooper of five years ago, but they were actually promoting different films — Lupita scooped various honors for 12 Years a Slave, and vice versa with Jared for Dallas Buyers Club. Jared especially raised eyebrows when he gave a very flirtatious shout-out to his fellow Oscar-winner on stage at the 2014 Film Independent Spirit Awards, while accepting his “Best Supporting Actor” trophy. “[To] my future ex-wife Lupita…I’m thinking about you, baby,” he said at the podium, making everyone’s hearts race.

Lupita once joked about the romance speculation during a visit to The Ellen DeGeneres Show in 2014, and even poked fun at another rumor: Miley Cyrus, who’s now married to Liam Hemsworth, was also linked to Jared in headlines. “Ah, but I thought Miley Cyrus broke us up. That was the last thing I heard,” Lupita teased to Ellen DeGeneres, adding, “It’s crazy, cause when I read these rumors, they’re so detailed that even I start to question whether they’re true or not. I know I’ve believed them in the past and now I guess I can’t believe anything.”

But Jared’s not the only actor that made Lupita feel accepted “within the Hollywood community,” as she also said director Steve McQueen and Brad Pitt “did look out for [her] big time” in the PorterEdit interview. Similar shout-outs went out to Sarah Paulson, Alfre Woodward and even Oprah! “Starting with 12 Years a Slave, I was welcomed [in Hollywood] with such warmth. My castmates surrounded me. I don’t know if they are aware of this, but I felt so protected,” Lupita explained.